I have been absent during the last month as my computer was deliberately unplugged. I needed time to walk among trees, read and spend time with visiting family. None of the above kept me from checking out new music and it afforded me some time to reflect more on the global changes feeding Jazz. There is nothing quite like a pandemic to make us re-evaluate our place in the world and to make us value comity over isolation. These connecting threads lead us into every corner of the improvised music diaspora.

Just in time for the holidays, I gave several Christmas presents to myself. The first was Keith Jarrett’s magnificent ‘Sun Bear Concerts’ box-set, recorded in Japan (which I had long lusted after). It was fitting in light of the news that Jarrett is unlikely to perform or record again due to a debilitating stroke. This boxset has often been overlooked. It is a musical statement of pure genius.  The second album was a recent release ‘Architexture’ by the German Jazz musician Florian Ross. ‘Architexture’ is an extraordinary album, sitting astride the broader traditions of ensemble Jazz. It is configured atypically and consequently it has a distinctly airy feel to it.

The album features a traditional jazz quartet, augmented by a conducted seven-piece wind ensemble. Ross is a gifted composer (and pianist) and his music has often been performed by large jazz orchestras such as the WDR. In this case, a more unusual configuration has let in additional light, while at the same time offering a rich and diverse textural soundscape. Using this palate Ross has crafted a programatic and personal journey through the world’s architecture.

The music speaks strongly of place, but not just Germany (where Ross lives). It speaks of the locations where his favourite architecture is found, and out of that comes an idiosyncratic chiasma. The streams that feed this album are plentiful and among them the twentieth century western classical tradition. The only composition not his own is an arrangement of Elgar’s Nimrod (var.9) for saxophone and wind ensemble. Elgar composed many of his works in a rented cottage and it is ‘Brinkwells Cottage’ in conjunction with Elgar’s works which inspired that particular arrangement.

From start to finish, this is a worthwhile journey, an evocation of archtectural visions, the places and sounds that inspired their constructions, and of course of Ross’s connection to those places. Alvaro Siza of Portugal, Antoni Gaudi of Catalonia Spain, the incomparable Oscar Niemeyer who designed Brasilia and many more. His Developments 1-4 are short through-composed pieces dedicated to specific architectural spaces or forms; Brazilian Architecture, the floor plan of a cathedral, the suburban prefabricated house, Bavarian Rococo; and dear to my heart ‘Glebe Cottage’ the home of Jazz pianist John Taylor.

The Album is out on the German Naxos label and can be accessed on streaming sites. I urge you to buy a physical copy as the booklet is a small masterpiece. Featured are some wonderful musicians, Florian Ross (piano, compositions) Sebastian Gille (saxophone), David Helm (double bass), Fabian Arends (drums), The Event Wind Ensemble, Susanne Blumenthal (noted conductor). The album can be ordered in stores or online. For more information check out www.florianross.de

Just before Christmas I attended a concert by Auckland based Musician Ben Fernandez. The occasion was the release of his latest album ‘The Music Never Stopped’ but it also served as a homage to the spirit that was evident in the community during the New Zealand COVID lockdowns. Fernandez is of Goan extraction but was musically active in Mumbai before settling in New Zealand. He studied Jazz at several Auckland institutions and is a regular performer about town. He has also maintained a connection to the Bollywood Film industry. Along the way his musical influences have been rich and varied and he showcased many of those during his concert of mostly original compositions.

There was a spontaneous improvised piano piece, A tribute to his former teacher Phil Broadhurst, tunes written for various family members and of particular interest to me, a duo involving Persian musician Rasoul Abbasi.  Abbasi played a Kamancheh which is an ancient-bowed instrument with a wonderfully mournful tone. The composition itself, and the contrast between piano and Kamancheh worked to the advantage of both (I have posed a sound clip). This ability to make strong and authentic intercultural connections is where Fernandez excels. It spoke to the universality of the improvised music traditions, and of empathy and the Jazz sensibilities.

Another tune of Fernandez which captured a pan-global essence was a piece written for a beloved family member ‘Chuchi’.  I have included that as a video clip. The line-up was varied and featured many of the musicians he had studied with such as Andrew Hall (who gave a great saxophone solo on the heartfelt tribute to Phil Broadhurst). The musicians on the trio number were Jo Shum (bass) and Ron Samsom (drums).  The concert finished up with Auckland vocalist Maria O’flaherty singing a great rendition of the much-loved standard ‘What a Difference a Day Makes’. In light of the pandemic, the tune had added resonance. ‘The Music Never Stopped’ features Ben Fernandez (compositions, arrangements, piano), Jo Shum (bass), Ron Samsom (drums), Warren Mendonsa (guitar), Rasoul Abbasi (Kamancheh), Jess Rogers (vocals), CeleBRationChoir conducted by Alison Talmadge. The album is available from benfernandez.com

While writing this, a number of interesting review copies and new releases hit my inbox. Among them, a soon to be released album from a Lebanese Jazz bassist Makram Aboul Hosn titled ‘Transmigration’. This wonderfully inventive musician has released his first album under extremely adverse conditions. As well as facing the devastation of COVID19 in Lebanon, there have been ongoing violent political upheavals, Banks froze the artists touring money, and if that were not enough, there was a devastating Port Explosion. The recording of ‘Transformation’ went ahead anyhow only three days after that last mentioned cataclysm. His is an album well worth checking out and to top off the stelar ensemble performances there are a number of guest artists like Joe Locke (who appeared remotely). The album will soon be available from all major streaming platforms. This is proof that high-quality Jazz exists everywhere. The artists are Makram Aboul Hosn, Nidal Abou Samra, Christopher Shaheen, Khaled Yassine, Joe Locke, Tariq Amery, Sima Itayim. Release date 18th February.

The last album to be mentioned is an ECM offering by Norwegian Kantele player and folk/Jazz vocalist Sinikka Langeland. The cut I will post is from her last release and it is so measured and so beautiful that it sends a shiver down the spine. Langeland is accompanied by Jazz Nordic legends in this album. She performs with the likes of Arve Henriksen, Trygve Seim and Anders Jorman. The YouTube track posted is ‘Deep in the Forest’. Available from all music stores and from streaming sources.

All of the above demonstrate the multiplicity of influences feeding Jazz. From multiple streams come deeper rivers.

JazzLocal32.com was rated as one of the 50 best Jazz Blogs in the world by Feedspot. The author is a professional member of the Jazz Journalists Association. Many of these posts also appear on Radio13.co.nz – check it out. 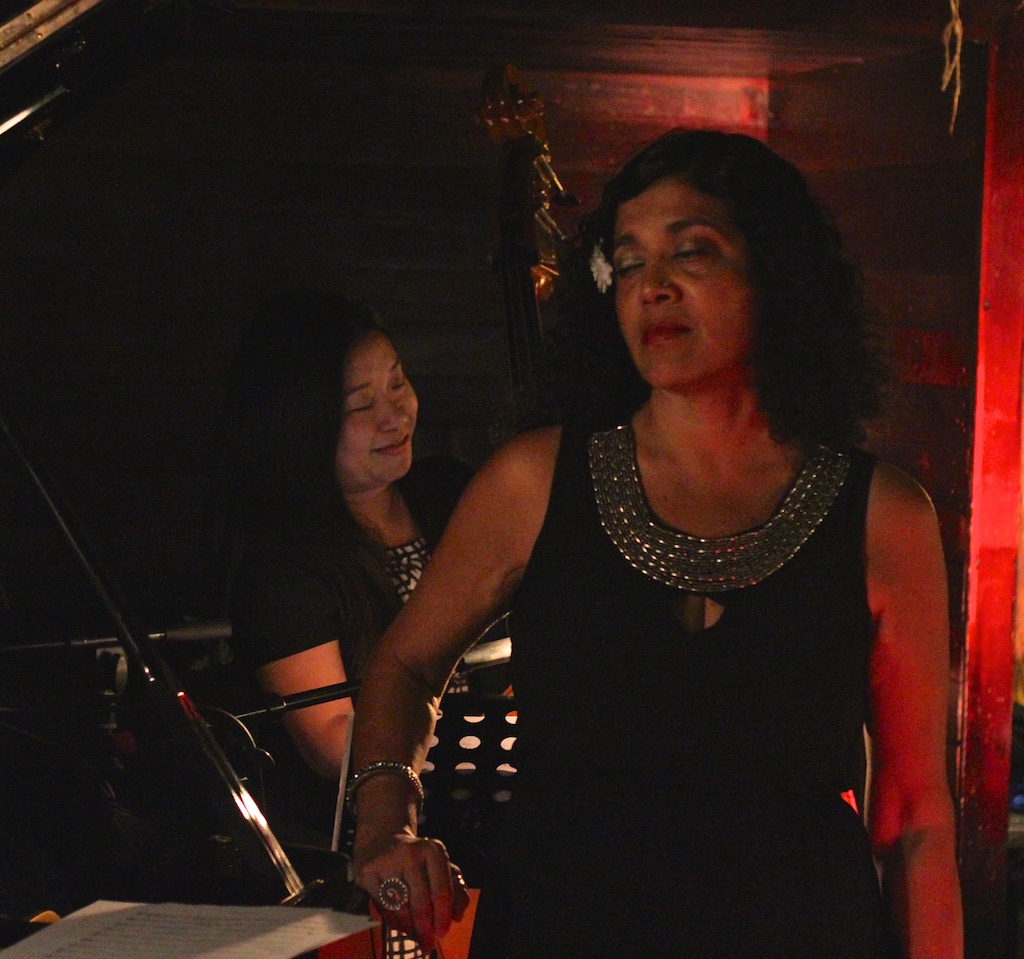 If you patrol the margins of the music world you will find inestimable treasures.  Beyond the notice of mainstream media and mainstream audiences there is a joyous revolution underway.   Not an austere revolution but one peopled by astonishing musicians, colourful characters and sonic explorers.  Like a good street protest, it is often bubbling with noise, insistent beats and a multiplicity of messages.  Last Wednesdays gig epitomised that.  The alternative music scene is often denigrated for its imagined ‘high brow’ complacency or its snobbish rigidity.  In this regard the Jazz police and lazy uninformed commentators have done improvised music a grave disservice.  Improvised music has been with us since the beginnings of art and the whole point of it is to shift the focus away from the mundane or the obvious.  The appropriation and assimilation of traditional forms is only a staring point.  Sandhya Sanjana and her gifted ensemble took the shamans path here; conjuring shapes and colours from the ether, re-harmonising, daring us to look at the familiar and the exotic from an entirely different vantage point.  This night cut right to the heart of improvised music.  Different worlds merged and they did so without compromising the integrity of the traditions they came from. 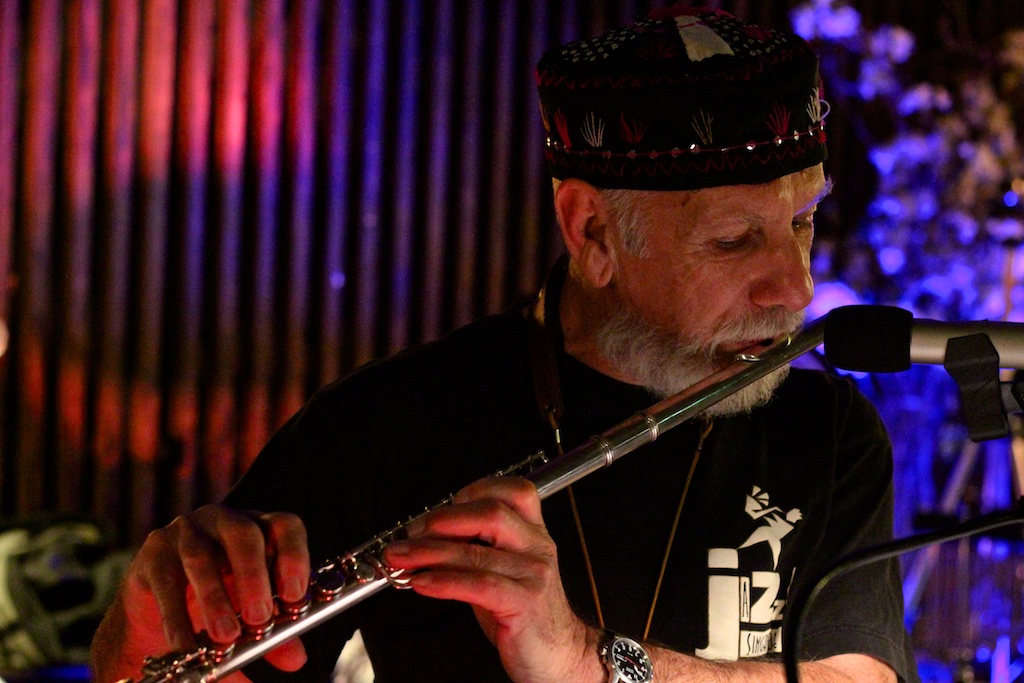 This was World/Jazz singer Sandhya Sanjana’s night but we have Auckland’s Ben Fernandez to thank for organising the gig.  I had not heard Fernandez play before this, but had long been aware of his reputation as a gifted, successful and multifaceted pianist.  Some months ago he invited me to his ‘Raag time’ fusion gig, but sadly I was unable to attend as I was heading out-of-town.  Later he messaged me to say that he would teaming up with Ms Sanjana in November.  Gigs like this are irresistible to me as I am enthusiastic about all of the great improvised music traditions.  The merging of these traditions has risks, but done well it’s marvellous.  The successful assimilation of middle eastern rhythms and the idioms into Jazz has long been achieved in Europe.  Fusions of traditional Indian music and Jazz are now emerging across the globe and those with an open mind and the right ears are the happy beneficiaries. 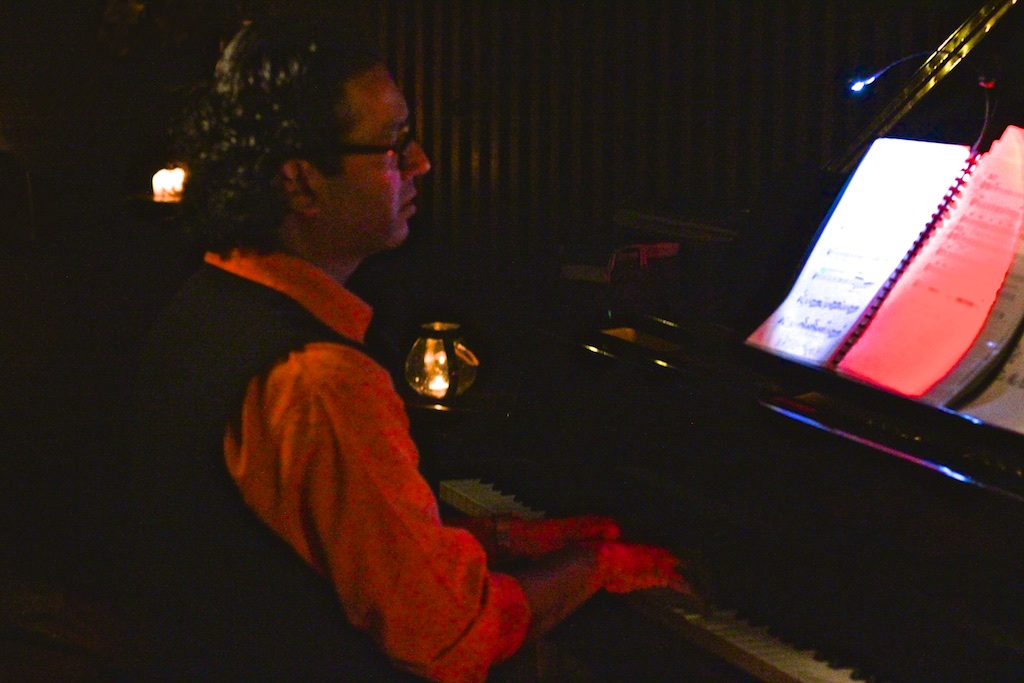 Sandhya Sanjana is from Bombay, but based in Holland these days (Ben Fernandez is a Kiwi but he also hails from Bombay).  She has performed with the greats in the World/Jazz field like Alice Coltrane and Trilok Gurtu.   She has an easy confidence about her that informs her performance and under her guidance a seamless fusion of styles occurs.  With Fernandez you get another strong influence as he imparts a distinctly Latin feel.  This classical and Jazz trained musician has chops to burn.  Out of this melange of rich influences a vibrant new music emerges.  It is compelling and exciting to hear.  There is a constant visual and sonic interplay between singer, tabla, traps drums, piano, bass and reeds (winds).  The shifting rhythms creating intricate cycles that pulse and swing.

Manjit Singh, originally from the Punjab is another Auckland resident and he is an acknowledged master of the Tabla and of Indian music.  I am often reminded of what a rich and diverse drum landscape we have in Auckland.  A world that I am still coming to grips with.  This man is a major talent and it is our good fortune that he is making forays into the Jazz/fusion music scene.  On traps was the veteran drummer Jason Orme and he was well-chosen.  The gig required a drummer who could play quietly but strongly and one who had the subtlety to interact with Singh.  On bass was Jo Shum who has not played at the CJC for some time.  She is an aware bass player and acquitted herself well.   Lastly was the reeds and winds player Jim Langabeer.  Langabeer is well-respected on the New Zealand scene and is one of a select group of doubling reeds musicians who are equally strong on flute (and he swings like a well oiled gate).   This gig had an embarrassment of riches and once again Roger Manins gets a big tick for his innovative programming. 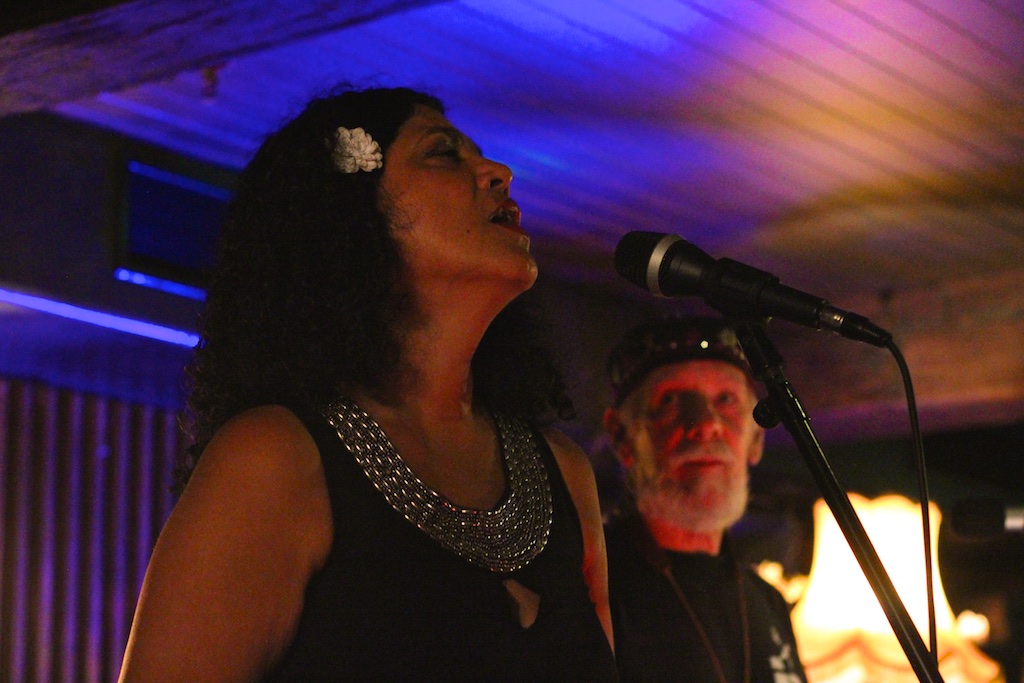 In the You Tube clip that I have put up, the breadth of Sanjana’s influences are immediately evident.  After a few bars of latin feel on piano we hear a Tala.  I know very little about the technical aspects of traditional Indian music but the rhythmic patterns (or Tala) are generally established early on.  This can also include a vocalised manifestation of the Tala rhythms.   Manjit Singh the Tabla player counted in the Tala and Sanjana responded with Mudras, claps and vocals .  The traps drummer and others responded to the patterns and so the piece built upon itself.  If done well, cross fertilised music is like water; it will soon find its own level.  This did.