If you patrol the margins of the music world you will find inestimable treasures.  Beyond the notice of mainstream media and mainstream audiences there is a joyous revolution underway.   Not an austere revolution but one peopled by astonishing musicians, colourful characters and sonic explorers.  Like a good street protest, it is often bubbling with noise, insistent beats and a multiplicity of messages.  Last Wednesdays gig epitomised that.  The alternative music scene is often denigrated for its imagined ‘high brow’ complacency or its snobbish rigidity.  In this regard the Jazz police and lazy uninformed commentators have done improvised music a grave disservice.  Improvised music has been with us since the beginnings of art and the whole point of it is to shift the focus away from the mundane or the obvious.  The appropriation and assimilation of traditional forms is only a staring point.  Sandhya Sanjana and her gifted ensemble took the shamans path here; conjuring shapes and colours from the ether, re-harmonising, daring us to look at the familiar and the exotic from an entirely different vantage point.  This night cut right to the heart of improvised music.  Different worlds merged and they did so without compromising the integrity of the traditions they came from.

This was World/Jazz singer Sandhya Sanjana’s night but we have Auckland’s Ben Fernandez to thank for organising the gig.  I had not heard Fernandez play before this, but had long been aware of his reputation as a gifted, successful and multifaceted pianist.  Some months ago he invited me to his ‘Raag time’ fusion gig, but sadly I was unable to attend as I was heading out-of-town.  Later he messaged me to say that he would teaming up with Ms Sanjana in November.  Gigs like this are irresistible to me as I am enthusiastic about all of the great improvised music traditions.  The merging of these traditions has risks, but done well it’s marvellous.  The successful assimilation of middle eastern rhythms and the idioms into Jazz has long been achieved in Europe.  Fusions of traditional Indian music and Jazz are now emerging across the globe and those with an open mind and the right ears are the happy beneficiaries.

Sandhya Sanjana is from Bombay, but based in Holland these days (Ben Fernandez is a Kiwi but he also hails from Bombay).  She has performed with the greats in the World/Jazz field like Alice Coltrane and Trilok Gurtu.   She has an easy confidence about her that informs her performance and under her guidance a seamless fusion of styles occurs.  With Fernandez you get another strong influence as he imparts a distinctly Latin feel.  This classical and Jazz trained musician has chops to burn.  Out of this melange of rich influences a vibrant new music emerges.  It is compelling and exciting to hear.  There is a constant visual and sonic interplay between singer, tabla, traps drums, piano, bass and reeds (winds).  The shifting rhythms creating intricate cycles that pulse and swing.

Manjit Singh, originally from the Punjab is another Auckland resident and he is an acknowledged master of the Tabla and of Indian music.  I am often reminded of what a rich and diverse drum landscape we have in Auckland.  A world that I am still coming to grips with.  This man is a major talent and it is our good fortune that he is making forays into the Jazz/fusion music scene.  On traps was the veteran drummer Jason Orme and he was well-chosen.  The gig required a drummer who could play quietly but strongly and one who had the subtlety to interact with Singh.  On bass was Jo Shum who has not played at the CJC for some time.  She is an aware bass player and acquitted herself well.   Lastly was the reeds and winds player Jim Langabeer.  Langabeer is well-respected on the New Zealand scene and is one of a select group of doubling reeds musicians who are equally strong on flute (and he swings like a well oiled gate).   This gig had an embarrassment of riches and once again Roger Manins gets a big tick for his innovative programming. 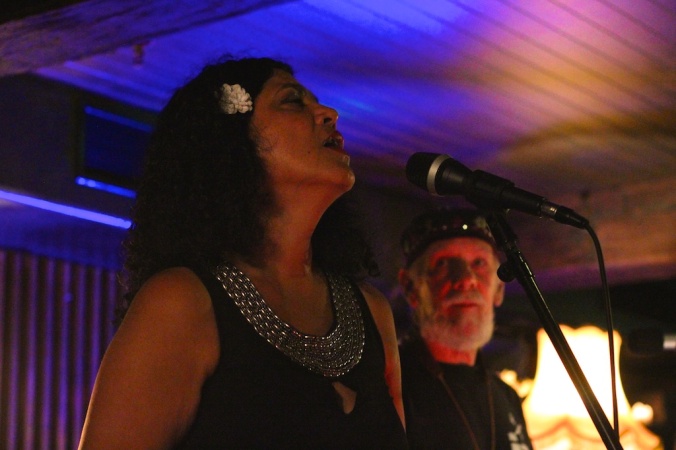 In the You Tube clip that I have put up, the breadth of Sanjana’s influences are immediately evident.  After a few bars of latin feel on piano we hear a Tala.  I know very little about the technical aspects of traditional Indian music but the rhythmic patterns (or Tala) are generally established early on.  This can also include a vocalised manifestation of the Tala rhythms.   Manjit Singh the Tabla player counted in the Tala and Sanjana responded with Mudras, claps and vocals .  The traps drummer and others responded to the patterns and so the piece built upon itself.  If done well, cross fertilised music is like water; it will soon find its own level.  This did.

One thought on “Sandhya Sanjana @ the CJC”