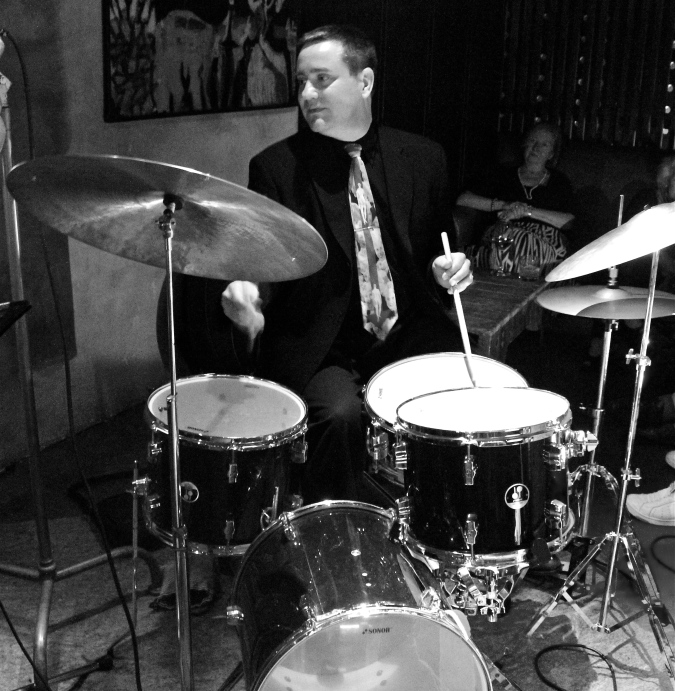 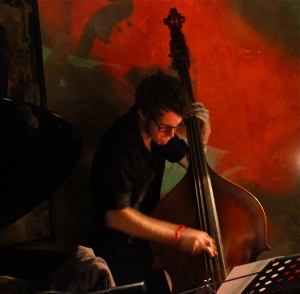 For those Aucklanders addicted to live Jazz, the month over which the CJC Jazz club was closed for Christmas seemed like an eternity.   The first of the New Years bookings made up for it though as premier Australian drummer Andrew Dickeson came to town and he brought with him a solid lineup (including a couple of ex-pat New Zealanders now living in Australia).  It was Andrews first time at the CJC but it will hopefully not be his last.

Andrew Dickeson is one of the most respected drummers in Australasia and in stepping out as a leader he has enhanced his already solid credentials.   Andrew has for some time been regarded as the drumming lynch pin of the Australian Jazz scene and when a visiting artist requires a percussionist he would be the first choice.

The band began with the fabulous number ‘Ill Wind‘ (Arlen/Koehler) and it was obvious from the get-go that the tasteful drumming was a cushion of energy powering the group.   As good as the musicians were it was the drummer that caught the attention first; not by showing off his chops but by his sheer musicality.   You were also aware of his powerhouse propulsive swing.   The drums managed to preside without ever overwhelming the rest of the band and to achieve this takes real skill.    This is the sort of maturity that experienced drummers like Jeff Hamilton bring to their gigs and it was nice to witness.

A point which illustrates this perfectly occurred when I spoke to Andrew the next day.    After listening to the CD I had wondered how he had managed to obtain such a crisp but soft sound from his ride cymbal on the ‘Weaver of Dreams’ track (Young/Elliot).    I asked him if he had muffled the cymbal in some way or ‘miked’ it down during mixing.   “No’ he said, “It is all about awareness of the situation.  I just play very gently when that is required”.    I had not known that you could play so gently on a ride cymbal without losing clarity of sound.   At this point Roger Manins leaned over and said, “this is what separates a good drummer from a great drummer.  The ability to fit perfectly into any given situation and to adjust your volume accordingly”. 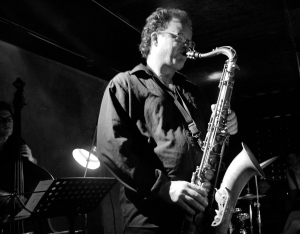 Andrew had used Roger Manins on the album and witnessing his performance at this gig it was easy to see why.    Roger is undoubtably the best tenor man in New Zealand but we sometimes forget how well-regarded he is beyond these shores.    I have written about his playing many times and each time I see him I wonder if he will better his last performance.  He usually does.   As a born story-teller he can captivate from the first few phrases, but the magic he weaves is also due in part to his stage presence.   On ‘Ill Wind’ the pianist had laid-out for a number of bars and in this space Roger mined the bones of the tune to the marrow.  That is his way and as the solo developed there was an increasingly ecstatic quality to his performance.   I have witnessed this before and it draws me to his playing again and again.   In Jazz authenticity is everything.

Pianist Steve Barry grew up in Auckland but he later migrated to Australia in search of greater opportunity.   He is no stranger to the CJC and his occasional gigs at the club are happily anticipated by his ever-increasing fan base.   For some years now he has been working on the Australian scene and he is exceptionally well-regarded there.   Some pianists have an X-factor and Steve is one of those.   The history of Jazz piano is somehow referenced in his playing but he is more than that.  While unafraid of the past he is not owned by it.   This is a journey of stylistic development that we are privileged to witness and it is an ongoing story.    In this setting he was not only a good soloist but the perfect sideman, as his comping and sense of timing were superb.   We get one more chance to hear Steve before he returns to Australia; next week he is co-leader of a quartet performing at the club. 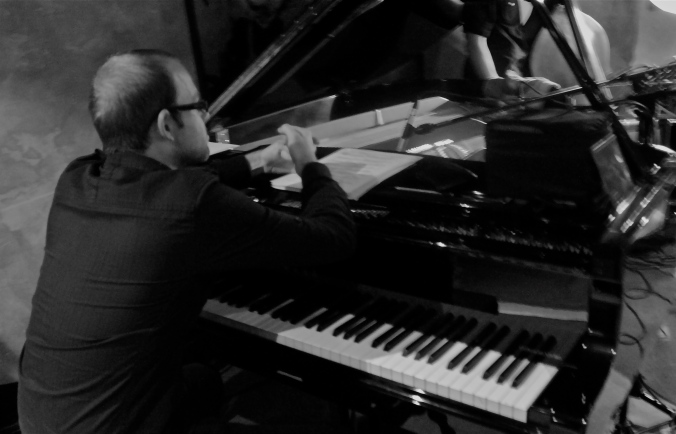 Tom Botting and Pete Barwick had been engaged for this one gig and they fitted in seamlessly.   I had not seen Pete Barwick play before tonight but he handled the charts with ease and performed each solo convincingly.   His strongest performance was on the Strayhorn balad ‘Isfahan.    His burnished ringing tone and clear articulation were just great.   Tom was a fixture at the club before moving to Australia and his bass playing is familiar to CJC attendees.     He is a reliable time-keeper but he can also be adventurous when challenged.  On this night he injected a sense of urgency into the uptempo numbers.  Sitting in for Alex Boneham would be quite intimidating to many bass players but Tom took it in his stride.   He had returned to New Zealand in disguise (no beard and shorter hair) but his signature bandstand persona was fully in tact.   Tom always looks and sounds extremely convincing and it is nice to have him back for a few weeks.

The other stand out number was ‘Soy Califa’ (Dexter Gordon).   To have Roger play a Dexter Gordon number is a no brainer.  He aced it and then some.  This was a great night out and once again it reinforced the strength of the Trans-Tasman Jazz alliance.

This album is well worth buying : ‘Weaver of Dreams’ – The Andrew Dickeson Quintet – Rufus Records (a division of Universal Music group).     rufusrecords.com.au – or  – andrewdickeson.com