We had been expecting the official release of Tom Dennisons ‘Zoo’ album but instead we got two musicians from that group in a new and exciting configuration.   While we were saddened that the ‘Zoo’ date was postponed, we could not complain as we were treated to a slice of Jazz heaven under the skillful co-leadership of Steve Barry and P J Koopman.

I make no bones about my enthusiasm for Steve Barry’s piano as I have heard him and reviewed him twice before.    Steve was back in town for two gigs only and the first of them under the leadership of premier Australian drummer Andrew Dickeson, had been a success by any measure.   This time Steve was appearing as co-leader and so many of his own compositions got an airing.  He and the much respected guitarist P J Koopman were also able to stretch out on some well-chosen and seldom heard compositions gleaned from the Jazz song book. 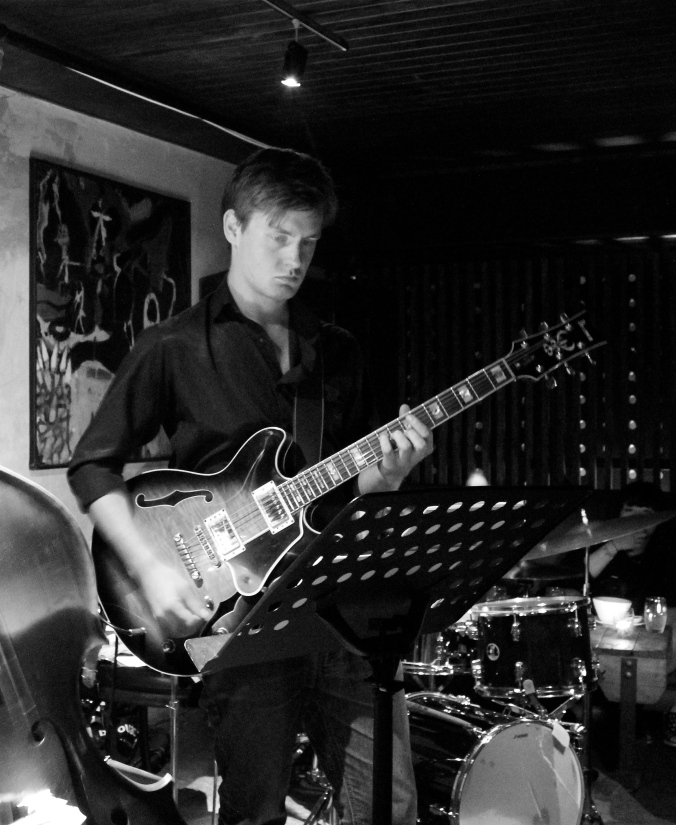 The other two quartet members were Oli Holland (bass) and Ron Samsom (drums).    This dream lineup gave us our moneys worth and a whole lot more.

The first number was the 1935 Jerome Kern/Oscar Hammerstein classic ‘I’ve Told Every Little Star’.   It started with the bones of the melody and swiftly evolved into a swinging medium tempo number.  The composition should perhaps be credited to a small melodic bird, as it came to Kern when he heard a rare finch with a beautiful name singing on his windowsill (Melospiza Melodia).  It was also the last thing Kern sang from his death-bed.   In the hands of this band both bird and composer could not have failed to appreciate the updating.

The next number was a rendition of the moody atmospheric ‘Mantra’ by Kendrick Scott.   This is the perfect vehicle for guitar and piano and its deep penetrating lines were used to advantage by the band.    It is also a number where the drums (with mallets) and bass can be brought right up in the mix and this was certainly not a band to miss such an opportunity.  As they moved through the set list the audience were transfixed.  The guitarist PJ Koopman was at his best that night and it was a joy to see how well he and Steve Barry interacted.    An imperative for piano/guitar configurations is for each to keep out of the others way and they did that instinctively as they have played together over many years.   With a tasteful drummer like Ron Samsom and a skillful bassist like Oli Holland underpinning the chordal instruments, it was never going to be anything but satisfying.

As the set progressed they played two of Steve’s compositions – ‘Untitled 3’ and ‘Unconscious-Lee’.    The latter composition was dedicated to Lee Konitz and his tune ‘Subconscious-Lee’ which he so famously played with Warne Marsh.   It was here that we saw Steve’s writing skills come to the fore and above all experienced the fluidity of P J’s guitar.   I have often been told by guitarists how difficult this Lenny Tristano stuff is to do.   Long unison lines performed to metronome like timing (Tristano hated flashy drummers and famously said that his preference was for a metronome as time-keeper – he would not have minded Ron I’m sure).  There are real subtleties in this music and in lessor hands the message could have been subsumed in the detail.  P J and Steve ran their lines perfectly and when I closed my eyes I could hear an echo of Billy Beaur (g) and Lenny Tristano (p).

The last set begun with ‘Parks’ (Steve Barry) and I have heard him play this before. The tune had stuck fast in my head from the first time I heard it and so I had always wanted to know more about it. It was composed as a tribute to Aaron Parks during a period in which Steve had been listening to a lot of his music (you can find Aaron on the ‘James Farm’ albums along with top rated ex-pat kiwi bassist Matt Penman – sampled on Sound Cloud). Once again Ron Samsom used his mallets to great advantage with Oli Holland’s bass lines weaving skillfully throughout. I will never tire of hearing this complex but satisfying tune.

It was probably the penultimate number of the night which will linger longest in the minds of the audience. A friend commented on how utterly beautiful it was and cursed the fact that her bus was due to leave before the number was finished. The tune was a medley beginning with ‘Iris’ (Wayne Shorter) and segueing into ‘Clusters’ by Steve Barry. It was a good choice on so many levels as it was a more reflective number; allowing the band to showcase their melodic skills, improvisational skills and mastery of the Jazz vocabulary. This was a tune where the subtlety of the exchanges between guitar, piano, drums and bass was paramount. To maintain subtlety while stretching out is always a hard ask but they managed it perfectly. Of note were PJ with his stunningly beautiful chord work and Ron Samsom with his colourist mallet work. Ron is one of our best Kiwi drummers and certainly my favourite. Like all good drummers he understands that less is sometimes more and he is extremely tuneful. I watch his moves closely on gigs and to see him use all parts of the stick or mallet (and even use a beer bottle rolled across the cymbal) is fascinating.

Steve Barry has just been awarded a scholarship and so he will be extremely busy in Sydney over the next three years. What with that and giging his timetable will be full but we hope that he will remember his home town and visit as often as he is able. P J Koopman next returns to NZ to perform at the Tauranga Jazz festival and we look forward to that.

Other tunes performed were ‘P J B’ by Sean Wayland, ‘Cyclic Episode’ by Sam Rivers and ‘Cheryl’ by Charlie Parker.

As our best and brightest move offshore others step up in their place – Sam, Eli (and friend Rachel) gave us a taste of that in the late night Jam session following the gig.