The way that music is interpreted by the human brain is understood up to a point, but there are many mysteries remaining. The topic interests neuroscientists, fans and musicians alike. While pattern recognition is one the of the main hooks drawing us deeper into a piece of music, we also become bored if the pattern remains relentlessly familiar. That doesn’t rule out repeated notes or a vamp as the points of variance are incredibly subtle; groove music or John Cage compositions bear this out. Whether subtle or overt, educated Jazz audiences prefer music that challenges, delights, reveals or amazes.

Good Jazz and improvised music does this despite the few fans who slavishly confine themselves to a single era or style. Live gigs will drag you out of your comfort zone and here’s the thing. Music is a language and we learn by hearing the unfamiliar and comparing it with what we know. Learning language is an innate skill possessed by all humans. As we listen to what we are unsure of, our tastes grow proportionally. These days Dolphy, Ornette Coleman, Art Ensemble of Chicago, Carla Bley and Zorn have a solid foothold in our consciousness; just as Jackson Pollack makes overwhelming sense when seen on a gallery wall. Jazz listeners should always want more than sonic wallpaper.

In keeping with Roger Manins enlightened approach as program director of the CJC (Creative Jazz Club), he had booked two very interesting groups to play on the 17th October 2012. First up was ‘Ruckus’, a quartet that was anything but run of the mill. The second was the out-brass ensemble (+ four), ‘Spoilers of Utopia’. What we got was joyful, challenging and outrageously humorous music. Music that was fiendishly clever without once resorting to introspective navel gazing.

‘Ruckus’ led by David Ward, a fine guitarist who has assimilated a dozen guitar styles and then stepped free of them. He composed the tunes Ruckus played and they were a metaphor for the inventiveness and vibrancy of the New Zealand Jazz scene. The set list was interesting and the group showed real guts in their interpretations. No one cruised through this material and consequently the collective pulse was quickly amped to a point of high intensity. Some of this material was reminiscent of a Fellini soundtrack, while still managing to evoke real-time global references. It was modern in the best possible way while hinting at its musical origins. I like musical surprises and this music surprised me. 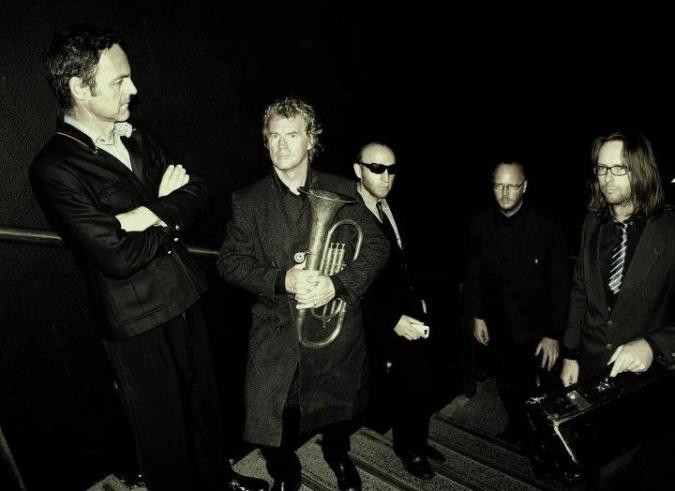 Club goers recognised two well-known locals in ‘Ruckus’, Chris O’Connor (d) and John Bell (vibes). I do not recall seeing the bass player Rui Inaba before but this unit really did come together. Chris and John had double duties this night as they were not only in ‘Ruckus’ but in the ‘Spoilers of Utopia’ as well.

Chris is a drummer that I am very familiar with as his multifaceted approach to traps and percussion makes him a favourite on a number of scenes. He is one of the most talented, open and interesting drummers in New Zealand and it is always fascinating to watch how other drummers flock to hear him. Chris never rushes to fill any void as he understands how complete an implied or missed beat is. He has such a well honed sense of time that he can push at the fabric of reason without losing momentum . He also knows how to remain relaxed at the kit and how to say more with less. The fact that he is one of the nicest cats on the music scene is an added bonus.

John Bell is an extraordinary vibes player and he generally favours the free over the straight ahead. In Ruckus he showed that he is comfortable moving between both worlds. He can swing like ‘Hamp’ then merge that groove seamlessly into an irregular pulse. The one thing that stands out however is his musical courage. John shows an integrity that few vibists do. While a lovely ringing vibrato is what we most often associate with the vibes (early Gary Burton or Bags), the instrument is capable of more besides. He is recapturing the history of the vibraphone while showing us a possible future path. The vibraphone is a percussion instrument and that can easily be forgotten.

The Spoilers of Utopia (also ‘Tparty Spoilers of Utopia’) are a brass heavy ensemble and they are marching resolutely into new territory. While the charts are initially familiar they are never quite what you think. The genius of this music is its kaleidoscopic quality, as it reflects a thousand fractured images while somehow keeping the whole intact. We feel that we can almost grasp the essence; only to find the familiar deconstructed. A pack of travelling Jesters has skilfully woven a new cloth from the old and what was once orderly descends into a pleasant chaos. We follow the twists and turns and just as we fear we are lost…. a disciplined brass band marches out of the haze. This is a new take on tension and release and it really works for me.

The ‘Spoilers of Utopia’ are usually a nonet and as anyone who knows me will verify, I just love a nonet. They are big enough to create to create the illusion of a larger unit but small enough to leave a sense of airiness. To balance out the five brass instruments there was Vibraphonist (John Bell), guitarist (Neil Watson), bass player(Darren Hannah) and drummer (Chris O’Connor). The Brass section were Kingsley Melhuish, Ben Ziber, Finn Scholes, Owen Melhuish, (Don McGlashan absent that night).

I know Finn Scholes having been wowed by his facility on the trumpet (or flugal horn) before. Neil Watson is also a familiar figure at the CJC and I noted how well his solid-body guitar sound fitted the brass dominant ensemble. I liked his contributions enormously and knowing his quirky offbeat take on life and music, it must have been a no-brainer to include him in the mix. There was also a degree of unison playing and with the unusual instrumental configurations, the timbre of the instruments merged to create a richer sound. George Shearing and Tristano grasped this long ago. Having Piano, vibes and/or guitar playing unison lines changed the sound. Putting vibes and guitar with brass was to produce a wonderful contrast. As the ensemble moved from order to chaos and back again I could feel the guiding spirit of John Bell at work: the demented dance instructor shimmering in darkness.

The track that I have selected from the ‘Spoilers of Utopia’ set is so good that I have watched it over and over. The tune is a hymn beloved of the Salvation Army bands, ‘We’re Marching to Zion’ (Sankey). Someone decided on the spot that a drum solo should occur in the middle. As the band proceeded the overall effect of this anarchic but strangely reverential wizardry brought us to our feet? The audience showed wild enthusiasm (and if you peered into the darkness and listened carefully, I swear you could hear Sankey laughing).

This comes from where Jazz began; brass marching bands and random instruments merging to form a new and riskier sound.

One thought on “Spoilers of Utopia / Ruckus@CJC”