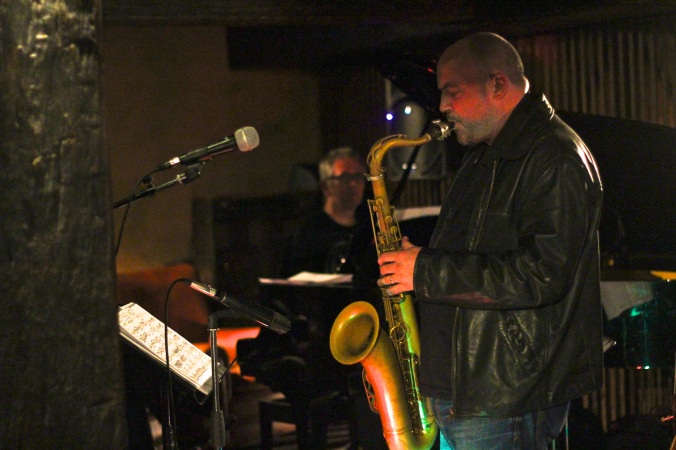 On Wednesday the 24th October we had an overseas visitor playing at the club, tenor saxophonist Sean Coffin.   This has been a great year for the Auckland Jazz scene and especially for the CJC (Creative Jazz Club) as a number of interesting local bands, out-of -towner’s, and overseas acts have appeared.  It’s the clubs imperative to offer genuine diversity, and this has caused the CJC to extend its reach.   Because Roger Manins has such a well established Australasian reputation and because the CJC is increasingly seen as a great club to play in, the net is ever-widening.   We are on the Oceania Jazz circuit fair and square. 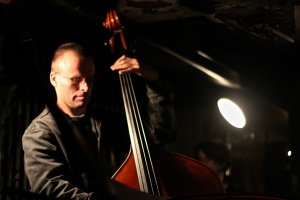 Sean Coffin is known in his native Australia for his stellar educational work, but it is his high level tenor playing that draws people to him.  He is among the best that Australia has to offer.   For many years he has been accompanied by his brother Greg (piano) and the work of this formidable pair is well recorded.   Sean studied at the Berklee School of Music and later as a postgraduate at the Manhattan  School of Music.  Among his many teachers I would single out George Garzone, as this world leading tenor player appears to have created a cadre of exceptional students in Australasia.

At the CJC Sean showcased his most recent compositions and they were mostly themed around his children.  This proved a good source of inspiration as the numbers ranged from heart-felt ballads to some faster paced offerings (one referenced children at play).   These lovingly drawn compositions were well crafted and executed and no one had difficulty relating to them.   It is arguably risky to focus exclusively on family material, but the gamble paid off because the improvisations were tender without once descending into introspective noodling.   The integrity of the compositions as Jazz vehicles was always evident.  A lovely ballad to ‘Garz’ (dedicated to George Garzone) rounded things off nicely.

A local rhythm section was put together for this gig and in due deference to the visitor he was given the best.  Ron Sampsom (drums) and Oli Holland (upright bass).  With Kevin Field overseas, Dr Stephen Small took the piano chair.  No one needs to puzzle over my views on Ron Sampson and Oli Holland as my support for their work has been constant over time.  These two go way beyond the merely competent; they are solid, reliable musicians and they are also gutsy enough to handle new challenges without flinching.   Listening to them live or in a recorded situation will tell you everything you need to know.

Seeing Stephen Small again was an unexpected pleasure, as the patch he normally patrols is on the periphery of the Jazz world.  Because he teaches classical piano at Auckland University it would be easy to overlook the fact that he has other strings to his bow.   He is a madman on keyboards and I have seen him cut loose on banks of synthesisers during a Jazz fusion gig.   To say that his fusion performance was riveting would be an understatement.  He created textural layers of sound which swirled and soared alternatively.  Put him together with a fusion versed guitarist like Nick Granville or Dixon Nacey and he will take your ears apart in the best possible way.  Stephen is also a highly talented, straight-ahead, post-bop pianist and judging by the whoops of delight as he negotiated his solo’s he needs to get down to the CJC more often.   I am casting my vote for one of his Jazz fusion gigs.

Sean worked hard all evening and at the end he invited Roger Manins to the bandstand.   There was obvious respect between the two men but that didn’t stop them from going hard out.  When the best tenor players occupy the same bandstand, it generally ends up being a joyful celebration rather than a cutting contest.   This was respectful but no quarter was given.