At its best Jazz is a place of unexpected intersections.  Being the music of appropriation there are deliberate collisions with other art forms and out of this comes new ideas and rich pickings.  The Joel Haines gig last week caught us by surprise as Joel seldom gigs these days.   He’s embedded deep within the session, film and TV world and his work will be known to most of us without realising it.   I have seen him perform a number of times over the years, but these outings are often in the role of sideman.  The last time I saw him was when his brother Nathan was in town. 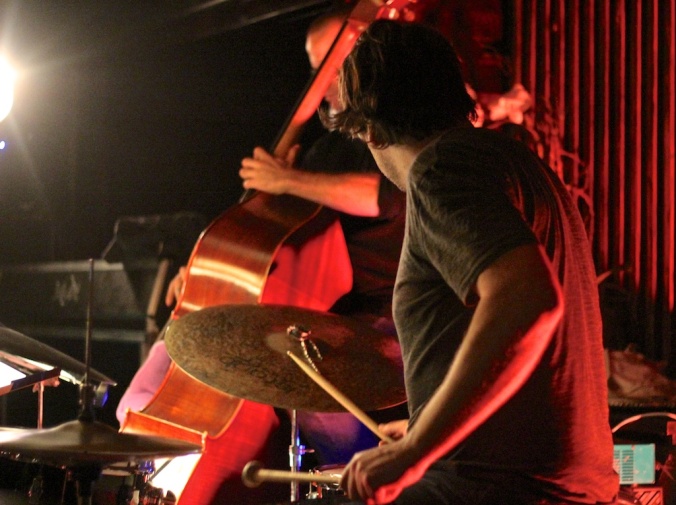 I really like his playing which infuses Rock and Country voicings into an open-ended Jazz vocabulary.   He musical lineage is impeccable as he comes from one of the most respected Jazz dynasties in New Zealand.  Father Kevin is a highly regarded and well recorded bass player, while brother Nathan is one of New Zealand’s best known and most respected Jazz exports.   This family has all bases covered with talent shared equally.

Joel is certainly not an extrovert and at this gig he sat huddled, as if subsumed by his rich-toned Ibanez.   When he leans forward to play, his long hair falls across his face and the effect is complete.  His sound however tells the opposite story, the shrinking of physical presence enables him to become the notes and the lines he plays.  There was only one announcement and there was only one number identified.

‘No introductions, lets just play”, he said quietly and they did.   On stage Joel is all about the music.

This is Jazz informed by Joel’s years at the ‘Cause Celebre’ and above all by his musical influences.  At times you can hear the echoes of Jimi Hendrix voicings or perhaps Bill Frisell, but the truth is that all of these influences arise from a deep well of ideas.  His material is predominantly lyrical and warm at heart.  You cannot separate this type of music from the film scores that have engaged us over the years.  Jazz and Movie sound tracks have been inextricably linked since Ellington’s ‘Anatomy of Murder’ or Miles ‘Escalator to the Scaffold’.   Joel works successfully in this world and a number of TV shows feature his music.  I am one of those people who remain after a movie is over, waiting for the music credits to scroll.  You would be surprised who you find in those fleeting glimpses.  I recently watched a great Sicilian move where John Surmon wrote and performed the soundtrack.  With the paucity of earning ability in Jazz, going into the studios or becoming a session musician has always been a good option.

For the last two numbers Roger Manins joined them on tenor.  The tune ‘Lady Lywa’ (by brother Nathan) was wonderfully performed and I am glad it was in the mix (as the only tune composed by someone other than Joel).  This would be a contender for a New Zealand Jazz standard if given a chance.  It was not surprising that Roger blended in seamlessly, as he Ron, and Oli are constantly playing together and the material gave them a solid spring-board for improvising.

I can recall Nathan once putting a cupped hand to his ear during a gig and saying, “Listen to that, the warm hum of valves).   That hum was also evident between numbers at this gig, but for the main part the warmth emanated from the compositions and the ebb and flow of a solid performance.