Reuben has played in Auckland before but I missed that gig.  I was glad that I did not miss this one.   With the exception of Alan Brown, all of the band have either lived in or have some strong connection with Christchurch.   Reuben Derrick is an important part of the Christchurch Jazz scene and with the Christchurch Festival underway very shortly we were lucky to lure him up for the gig.  In hound dog fashion he had tracked down an impressive set list, including several tunes each by Monk, Steve Lacy and Charles Mingus.  The two Monk tunes were ‘Ask me Now’ and ‘Bolivar Blues’. 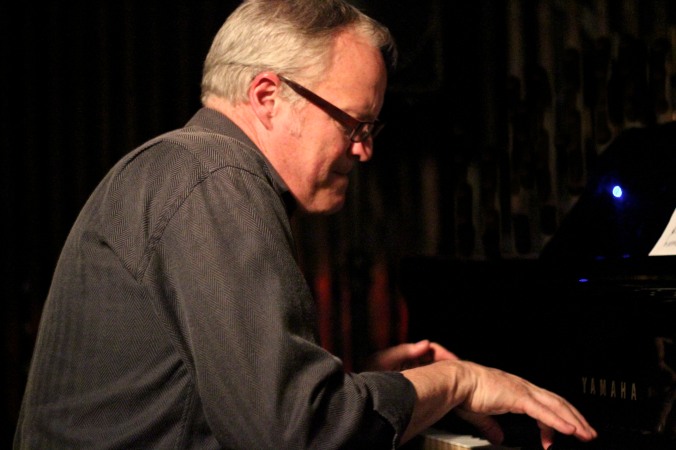 Both are familiar to me but it took me a moment to realise what they were.  They breathed new life into these much-loved but less-often-heard tunes and amazingly they made them sound as fresh as paint.  They did so without reharmonising, nor tackling them in an especially angular way (That would be pointless as you can’t out-Monk, Monk).  There were not so many jagged edges but these were great renditions.  Authentic and so accessible that their ‘Bolivar Blues’ has been singing in my head ever since.

Reuben plays an older instrument and the character of that tenor really suits his bluesy-earthy approach.   Some tenor players depart the melody before it is stated but Reuben stands on confident ground.  He is a an intensely melodic player but there is nothing clichéd about his approach.  This is most often seen in the older bop era players, who were able to stay close to the melody but still tell a great story.   Another thing that I liked was the way that his improvisations unfolded with an inner logic.  A logic that allowed you to trace the steps back in your mind.   A journey shared.

I am not sure whether Alan Brown has played with Reuben before, but he couldn’t have fitted in better.   I have learned over the years that Alan is not only gifted on keys and piano but he is able to adapt to a multitude of styles.   I have not heard him play Monk before but he gave the band exactly what they required.   Solid decisive chord work and inventive solo’s.  He navigated Monk’s choppy lines with the same ease that he tackled the very different compositions of Steve Lacy. 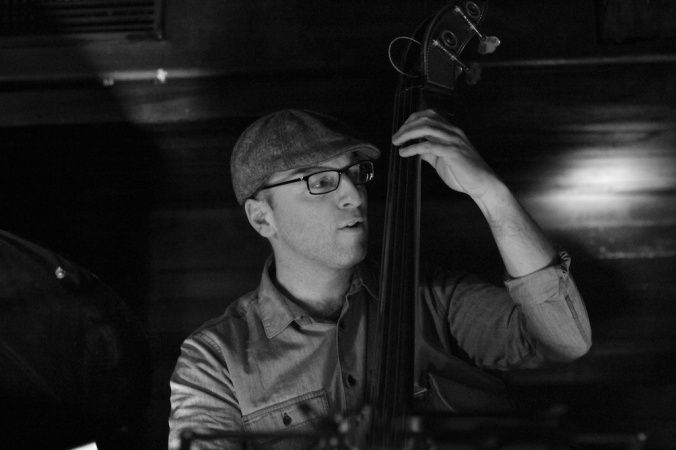 There were two familiar faces in the lineup, Andy Keegan and Richie Pickard.   Andy has played a number of gigs about town since moving up from Christchurch and he is often at the CJC.  He is a versatile drummer and we saw that demonstrated as he moved effortlessly from colourist to bop drummer during the gig.   I like his time feel and the fact that he lays down a solid beat without drowning out the others.  He plays to the room.   I often tease him by saying that he is a very photographer friendly drummer, as he often leans forward as he gets into a number.

Ritchie has also played the CJC before and the last time I saw him was with Dixon Nacey.   This is very different material to the high-octane tunes that Dixon was playing and so I saw another side of him in the Hound Dogs.  I found him especially strong on the ballad material like the quirky ‘Ask Me Now’.   The other member of the Hound Dogs is guitarist Sam Taylor and he is not seen in the CJC very often.   That is a pity because his sound is different from many of the Auckland guitarists.  He draws more deeply on traditional Jazz guitar and he does so convincingly.  At times his comping was very reminiscent of Freddy Green’s; a quiet rhythmic strum that pulled back slightly on the beat and gave the number a deep swing feel.  His comping may reference swing but his lines are pure Be bop or Post bop.

These guys may not get together very often but when they do they are a solid unit.  With a great sound like that, I hope that they come and play the club again