The 2014 Auckland Jazz festival is over and it is time to reflect on ten days of warm vibes, edgy grooves, good company and above all truly exceptional music.  Auckland is a difficult beast when it comes to festivals.  It is like a smaller version of Los Angeles; a spread out town centre and an urban area sprawling over 600 Square Kilometres.  This contrasts with the smaller Wellington, where the suitable music venues are in close proximity.  While getting festivals off the ground has always been a challenge in Auckland, there are willing audiences out there.  The trick is getting them to pay attention.  It was an ‘underground’ festival and apart from a handful of flyers, some posters in the participating venues and student radio, the publicity machine was Facebook, a hastily created website and word of mouth.  In spite of that people turned up and everyone enjoyed the gigs.  Town halls and large commercial venues are utterly without soul and the decision to stick to smaller venues made good sense.  Because of that festival goers got to experience live music up close and personal.  A woman at the Mike Nock gig expressed delight that she could sit less than a metre away from the band.  Close enough to catch every nuance and smile; to connect with the joy.  To be so close to one of the worlds great pianists is an experience never forgotten.  This sort of intimacy is gold.  This is a solid foundation to build upon and potential sponsors will hopefully see that and come onboard next year.

Over the ten days I managed to attend five gigs, including the three headline acts.  Like any music lover I wanted to attend more.  Actually there were over thirty gigs on offer for those with time on their hands and that is impressive.  The opening gig was at the Portland Public House in Kingsland which is an intimate entertainment space with a delightfully shabby-sheik decor and great bar food.   ‘The Troubles’ were the perfect act to launch the festival, as their rollicking, anarchic, good time vibe engaged the large and enthusiastic crowd from the first note.  I am a huge fan of this group which is a collective led by Wellington drummer John Rae.  This time, and it was an inspired move, they had included Auckland’s Roger Manins in the lineup.  This transformed a wonderful boisterous freedom loving band into a full-scale riot.   The five piece string section were the perfect foil and they shone.  Neither Manins nor Rae gave any quarter as they hungrily fed off all challenges like musical Pacmen.   The Troubles music bubbles out of a deep well of musicality and exuberance.  It references the sounds of protest, eastern European music, the vibrancy of street life and above all joy.  As the chants, cries, shouts, dissonance and snatches of sweet melody catch your ear, you realise that this is ancient and future music.  It is honest and often deeply swinging.  It is everything from Mingus to now. 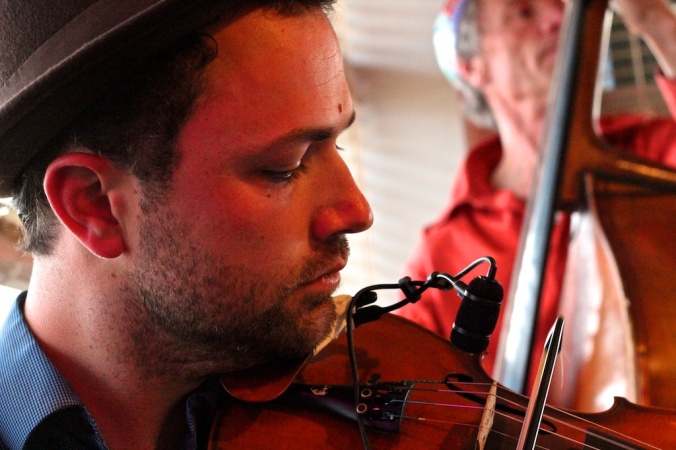 On Monday I got an email.  ‘If I was free, would I be able to pick up Mike Nock and his trio from the airport’.  I truly like him as a human being as there is an irreverence and a sense of fun about him.  Hanging with him is a positive experience and it was also a good opportunity to gain a few insights into the gig.  He has a Zen approach to life and to music; living in the moment and cutting through the bullshit.  He is funny and a great storyteller, but surprisingly humble about his own impressive accomplishments.   Anyone who has studied the history of New Zealand music (and arguably Australian) will inevitably say at some point, “Oh yeah, Mike Nock; this is THE guy”.  At the airport I ran into another returning Jazz Pianist Steve Barry, so we all crammed into my hatchback.   Musicians, personal luggage and cymbals.  “What will you play tonight” I asked on the way into town?  Mike gave a typical Mike reply, “Man I don’t always know until my fingers are on the piano keys”.  When I repeated this to bass player Brett Hirst he laughed, “Yes and I age a year every-time he does it” he said.   “These days whether a standard or an original, all I want to do is reach deep inside until I find the poetry”, added Nock. 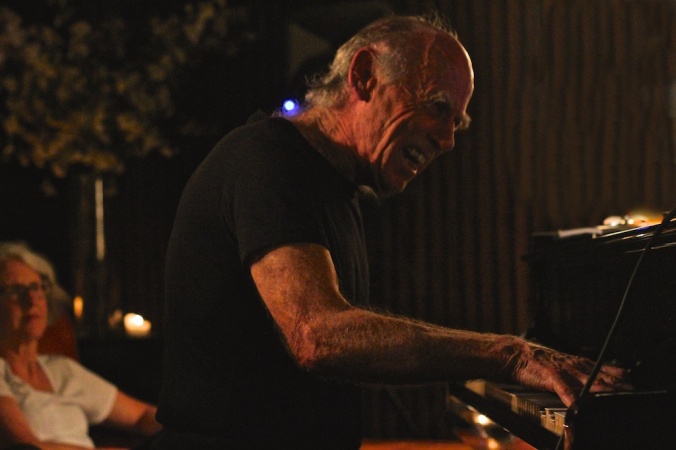 It is this last statement that epitomises his approach.  You watch him seated quietly at the keyboard, calmly flexing his arms and then suddenly he is playing; the melody stated as if in passing, feeling his way to the essence of a tune.  It is always a masterclass for the careful listener.  All of the dross and excess baggage of a tune is dispensed with as the smiling Nock shares his joy with those present.  As he plays he sings quietly or exclaims joyously.  Sometimes pausing momentarily, dropping his hands from the keys, acknowledging a special moment.   In a club like the CJC you get an immediacy like no other venue and being part of a Mike Nock experience is very special.   Nock played a variety of tunes, some well-loved standards, some almost forgotten older tunes and an original or two.

When he played Irving Berlin’s lovely ‘How Deep is the Ocean’ he prefixed it with a long intro, pulling you deep into the mood of the piece and then suddenly swinging madly, the melody dancing with him.  It was as if we were hearing it for the first time.  Next was ‘Solar’ (Miles Davis), which in lessor hands could be viewed as a surprising choice.  The tune was given no quarter.  Nock, Brett Hirst and James Waples (drums) immediately peeled the layers away to reveal an energised core which burned like a super nova.   Life is good when the Mike Nock trio is in town.

The next night featured the Benny Lackner Trio from Germany.  Lackner has played at the CJC twice previously, but this was the first time that he had brought his European trio with him.  He is an interesting artist and his music is very different from that of the Mike Nock Trio.   This music is firmly rooted in the European aesthetic and less rooted in the bluesy traditions of America.  What he offers is something wholly modern and closer to the oeuvre of artists like Esbjorn Swennson and Tigran Hamasyan .   It was a rare chance to hear a type improvised music that I have long followed with enthusiasm but get few chances to hear being so far away from Europe.  Rather than drawing on the blues it seems to appropriate folk music and near eastern song forms.   The tunes though are all originals and they are often lovely to the ear.  The trio uses electronics in the way that EST did, but there is more edge these compositions.  There are complex cross rhythms and pulsing bass lines on the upbeat numbers; probing filigree explorations around the beautiful melodic lines on the ballads.  On upright and electric bass was Paul Kleber and on drums the interesting Matthieu Chazarenc.  This was music to savoured and thought about long afterwards.  Offering complimentary but contrasting artists is at the heart of good festival programming.

The third headline act was a double trombone lineup.  From the USA was Francisco Torres who is best known for his stellar work with Poncho Sanchez or the award-winning Gordon Goodwin Big Phat Band.   His credits are considerable and everyone from Terrance Blanchard to Natalie Cole has benefitted from his strong playing.   The other trombonist was Wellington’s Rodger Fox who like Torres has an impressive list of credits to his name.  Fox wears many hats, promoter, educator, composer and trombonist.  Neither Torres nor Fox had played at the CJC before and it was appropriate that they were given a quality rhythm section.   On piano was Kevin Field, Bass Oli Holland and drums Ron Samsom.  The gig was therefore titled ‘two bones and a dog’.  The dog reference was about the ‘Dog’ band which features Field, Holland and Samsom.  Perhaps because it was the third headline gig in a row the numbers were down and that was a shame because they played like there was no tomorrow; mostly standards and particularly those with strong trombone associations.   It was nice to hear a tune by the ill-fated master of the west-coast trombone, Frank Rosolino.  I am always overwhelmed by the warmth of the instrument.  In the semi darkness a glow of burnished gold radiated from the horns, reflecting the warmth of the music perfectly.  There were a number of trombonists in the audience, grinning from ear to ear.   Another great festival night.

The final gig that I attended was at the Golden Dawn.  Recently voted the best bar in town, it is a welcoming place; a venue begging to become your local, no matter how far away you live.  The management have the happy knack of engaging the quirkier bands, showcasing an edge that can only emerge from underground music.  The lighting is particularly appealing, something between a vaudeville dressing room and a prohibition era speak-easy.  The multi hued lighting seeps through dark-toned wood grain and bounces off the bottles behind the bar, losing its intensity on the journey.   Sunday night is jazz night and what better place to finish up a festival.  When I arrived the Alex Ward trio had just set up and they played a short opening set.  We heard Tigran Hamasyan’s ‘leaving Paris’, a Brad Mehldau tune (from his Easy Rider album) and a standard or two.  The number that I most enjoyed was Wards own composition ‘Litmus Test’, which strongly references and builds upon the vibe of 60’s McCoy Tyner.

The closing set was ‘Harry Himself’ and this under-the-radar band is truly amazing.  It is a hybrid music with enormous appeal, similar to the Jazz from the Nordic countries.  Unusual combinations of instruments, some electronics, loops and an endless supply of deep grooves.   All of the musicians were of the highest calibre and perhaps this is the bands ace in the hole.  When doing something brave and unusual, do it really well.   Leading the band was Kingsley Melhuish on tuba, trumpet, trombone, flugal and vocals (and pedals).  On pedal steel guitar and Fender was Neil Watson, a much admired musician who can subvert and then create afresh like few others.  Sam Giles was pumping out-deep groove electric bass lines and it was good to see him on the band stand again.  At the rear and barely visible, but clearly audible, was Ron Samson, a drummer as respected as he is versatile.  Carried on the pulses of blue light were shimmering outlines, accompanied by mesmerising waves of sound; intensely textural grooves, layer building upon layer.

At times Melhuish would set up a loop on tuba, tweak the sound and then play wonderful figures over it on trumpet or flugal.  In behind, bending notes on fender or adding fills on the pedal steel guitar was Watson.  This unusual combination of instruments works so well that it should definitely be repeated.  It begs further explorations.  With Samsom and Giles in the mix a pulsing original sound scape unfolded; perhaps best described as a Second Line gumbo meeting psychedelic Americana.  The festival finished up with a Jam session at the same venue.

Those who attended the various festival gigs were very pleased with what was on offer and those who found out too late cursed their ill luck.   I understand that the notification period will be longer for next years festival, so watch out for it next Spring.

Where: The CJC (Creative Jazz Club), The Portland Public House, The Golden Dawn.

Note: I will add a Torres/Fox video shortly