I first heard the JAC two years ago and I liked what I heard immediately. Their sound has textural complexity, but the charts are so well written that the band manifests as if it is a single organic entity. As they move through the pieces, rich horn laden voicings appear, shimmer and fade seamlessly into the next phrase. In spite of the heavy punch of the front line, the band can float airily over passages. This affords them choices that are seldom realised by larger ensembles. They have a real nimbleness 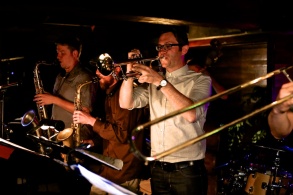 and this is surprising considering their large musical footprint. A bigger footprint than the size of the band would suggest. The really good nonets and octets achieve this.

The solid four-part horn line is the power house of the unit, while guitar and piano balance out the sound. I have to mention Cameron Allardice at this point as he is so integral to the JAC’s sound mix. I have heard them play with and without Allardice and with him is my strong preference. He has grown so much as a performer and soloist over the last year that I hardly know where to start. He is not a loud player but his authoritative solo’s and fills just sing. He gives a soft but penetrating edge to the mix.

I watched him at the Tauranga Jazz festival and he approached his solos like Rosenwinkel. Not so much in phrasing but in energy as he gained momentum during solos; lifting free of the earth as the sound flowed among us, like water over a spillway. And all the while maintaining an absolute clarity of purpose. These high wire acts require courage and confidence and he showed these attributes in spades.  He is also one of the main composers of the group and his charts are stunning.

This is an ensemble of stars and leader, altoist Jake Baxendale is certainly one them.  He can deliver searing heart stopping solos and then drop into the mix in an eye blink.  He is the other contributor of compositions (and arrangements) and his principle guidance that moulds the unit. His ‘Thieves in the Night’ is a masterpiece of composition. Their album ‘Nerve’, recorded early in The JAC’s life has wide appeal. Since its release they have been on the road (or gigging) almost constantly. The time on the road has sharpened them considerably and that must show in the new album; The recording session takes place in a few weeks and judging by the material that we heard at the CJC gig (and at The Tauranga Jazz Festival), an already polished band will jump up another notch. 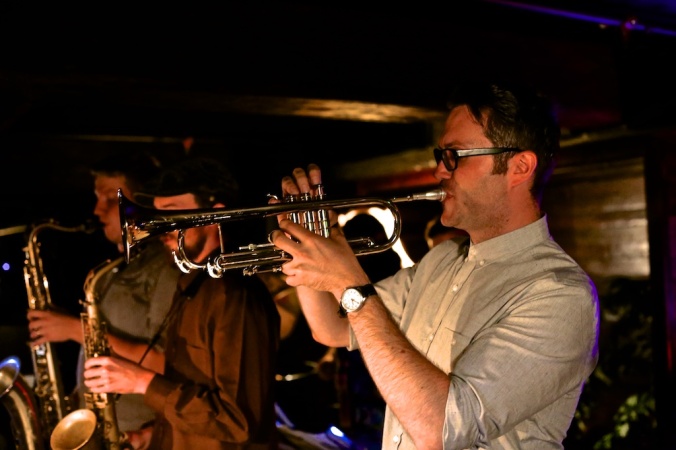 Every player is integral to this project but trumpeter Lex French certainly stands out. He arrived back in New Zealand from Montreal a seasoned performer; his credentials are impeccable. He is a strong ensemble player and during solo’s he pulls off feats of brass bravura that New Zealand audiences seldom hear. He has chops and ideas and the confidence to pull them off. I have at times worried about the meagre numbers of high-quality trumpet players on the local scene. French may well address this as he will certainly inspire others.

Daniel Millward on piano (and keys at Tauranga) gave impressive performances as did Chris Buckland (tenor) and Mathew Alison (trombone). Millward is a fine pianist but for some reason, probably the sound mix, he shone through more on keys at Tauranga. Buckland gave some stunning solos and again the Tauranga performances come to mind. Last but not least are bassist Nick Tipping and drummer Shaun Anderson.  Behind every solid group are musicians like these.  Tipping is the most experienced of the JAC musicians and he instinctively understands how to keep the groove. Linking rich and complex harmonies like these to the rhythmic flow requires just such a musician. Anderson likewise performs strongly.  Working with Tipping and bringing that big band drum feel to the unit. 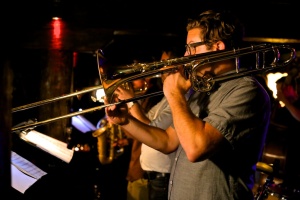 If you love to hear well written charts played to perfection, referencing everything from fifties jazz up to modern times, purchase the JAC’s albums.  Once again we must acknowledge Rattle here. Without a quality local label like this, such albums would have less chance of being released. The JAC were deservedly nominated as finalists for the Jazz Tui 2015. Expect to see them nominated next year.