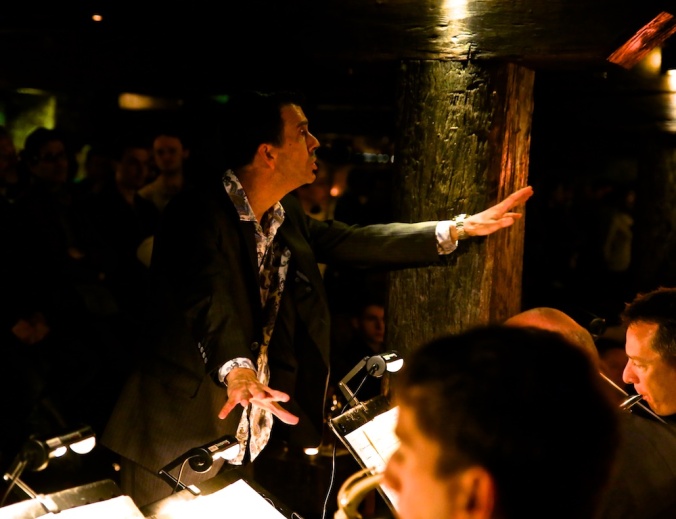 A jazz orchestra has thirty-six legs and more moving parts than the Turing computer. While an Orchestra is a collective, it utilises individualists, people skilled at breaking rules and who like nothing better than departing from the charts in front of them. They must manoeuvre through complexity with the grace of a ballet dancer and most often while playing counter melody. These actions require both micro precision and big picture awareness; seventeen players responding to multiple sonic cues while following the exhortations of a conductor. The conductor is a man waving his arms about at the edge of vision. To make matters worse conductors glide about, materialising in odd places, scaring the musicians with their sudden appearance; now beside the trombone line, now confronting the bass player with gentle shushing gestures. It is musical theatre of the highest order and I love every minute of it.

A Jazz orchestra needs a cohesive pulse; an innate sense of swing. This quality defies definition, but a discerning audience will recognise the lack of it immediately. One misstep can bring the entire delicately balanced edifice down on their heads. Given the above, it is a miracle that Jazz orchestras survive; complete the journey towards finding their musical feet. It is our good luck that the Auckland Jazz Orchestra did.

I have watched and enjoyed the AJO for a number years and there is one constant. In spite of everything that militates against their very existence they get better and better. In spite of some changing personnel, the core of dedicated regulars hold the line. These musicians are superb and they obviously inspire the newer members. What we heard on Wednesday was a confident band, at times tight as a drum and nimble. At other points in the performance they were slower moving and whisper quiet. This ability to modulate en-mass is impressive. Oddly, they were better as a band in the first half than the second, although hearing the entirety of Mike Booths Auckland Harbour Suite was most enjoyable. Two of the movements appeared for the first time including ‘Harbour Lights’. It is fitting that Booth’s arrangements and compositions are given prominence, as he and co-leader Tim Atkinson are the founder members of the AJO. Writing orchestral charts is a massive undertaking and an increasing number of Kiwi musicians now embrace that challenge. Band members Mike Booth, Tim Atkinson and Andrew Hall contributed memorably in this regard.

The set list was a mix of compositions (or arrangements) by band members and ‘outsiders’. Memorable ‘outside’ compositions were those by Kiwi musicians Thomas Botting (Bloom), Nathan Haines (Five Dimensions) and Glen Wagstaff (Polaris).  Mike Booth’s adaption of ‘All the things you are’ (All things in 5 and 3) was a delight as was Kenny Garrett’s (November 15). ‘Those Nights’ by Hall was a good number to finish with as it has punch, familiarity and groove. There were a number of nice solos, but the drum work of Cameron Sangster stood out. Not every drummer can handle this roll but Sangster can. The AJO gig that I am hanging out for is their Album release gig for Tim Atkinson’s ‘Darkly Dreaming’ suite. This will be part of the Auckland Jazz Festival in October and it shouldn’t be missed. I photographed them during the recording session and I was deeply moved by what I heard. This will be their coming of age gig and hopefully a forerunner of the wonders to follow.

Photographing a Jazz orchestra in a dark confined space requires the patience of Job. You roam around as unobtrusively as possible, looking for long sight lines that don’t exist; reaching the inevitable conclusion. Take shots of the disembodied parts in the hope that the viewer will be able to reassemble the entire beast in their heads. For this performance the AJO was conducted by Mike Young (replacing Tim Atkinson).

The AJO (Auckland Jazz Orchestra) can be followed on their website. 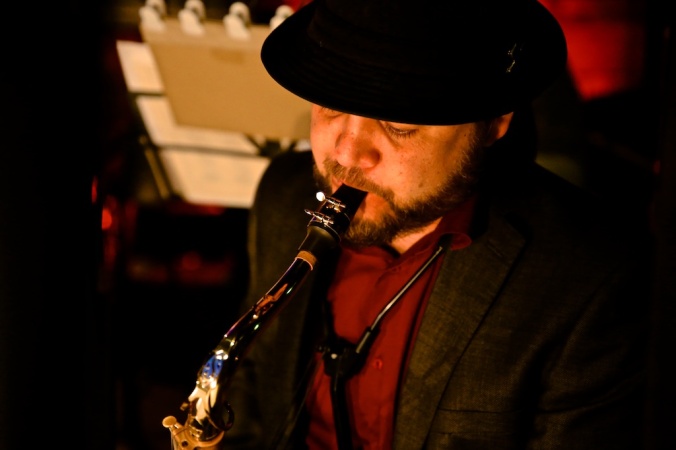