Having reviewed the ‘Two Out’ album a few weeks ago and thoroughly enjoyed it – it was a certainty that I would enjoy the ‘Two Out’ live gig. Mike Nock and Roger Manins are rightly celebrated as being at the top of their game, but neither trades on reputation. Both approached this gig with humility. As they settled into the music you could feel the absorption; punctuated by occasional smiles when a particular phrase surprised them, often delighting at what fell under their fingers. At times they seemed to defeat the physical limitations of performance; simultaneously observing and creating. This is a Zen thing and it cuts to the heart of improvised music. Others noticed it as well; one musician said to me afterwards, “Man there was no ego on that bandstand and it was a beautiful thing to witness’. He was absolutely right. 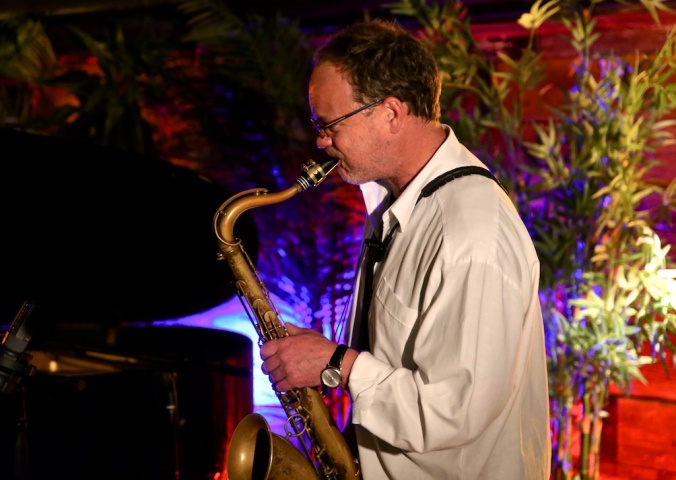 Most albums require careful planning, the ideas gestating over time, rehearsal upon rehearsal shaping the direction. Then there is the other type arising from happenstance. ‘Two Out’ arose out of a relaxed jam between friends. Manins was relaxing with Nock one January morning in Sydney when they decided to play a few tunes (as musicians often do when relaxing). What took their fancy were the often forgotten tunes, ‘the ones that our mothers used to sing’. As they worked their way through the tunes Nock suggested that they record; just for fun. Shortly after they ended up recording in the Sydney Conservatorium’s Verbruggen Hall. The hall contained a wonderful Fazioli grand piano much to Nock’s delight.

It is our good fortune that ‘Two Out’ was performed last week for New Zealand audiences. Nock explained that they had actually recorded 16 songs, but the limitations of CD space required these being reduced to eleven. On Wednesday we heard a significant number of the tunes from the album plus a few that didn’t make the final cut. In particular there was a version of ‘Softly as a Morning Sunrise’ (Romberg/Hammerstein). A wild joyous free-flowing version which brought out the best in both musicians. At times gentle but at other times carrying the echoes of a boisterous 1930’s radio performance. At that moment, listening, I visualised my mother, leaning over an old upright Victrola and humming along happily. The other addition was ‘But Beautiful’ (Jimmy Van Heusen). An overwhelming sense of respect and intimacy was evident in their interpretation of that tune. It brought a smile to everyone’s lips. When friends like this collaborate it is profound …… but beautiful.