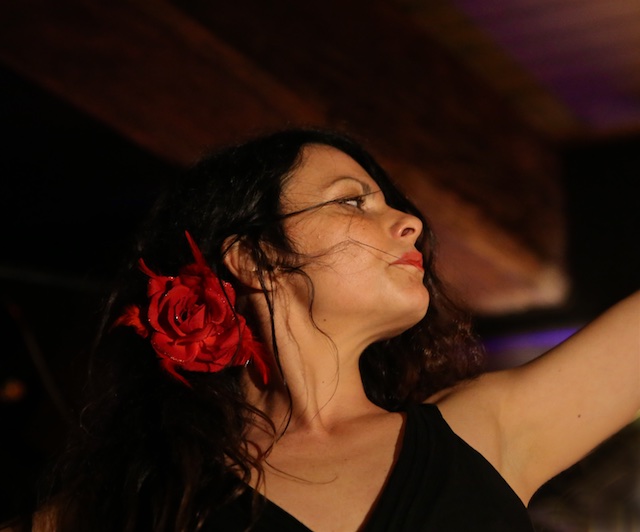 When I recently interviewed visiting Flamenco dancer Isabel Rivera Cuenca she told me that she had met some wonderful New Zealand improvising musicians and, in particular, she mentioned Jonathan Crayford. They met at a party and briefly discussed doing a project together. As they had not been able to make contact since I supplied email addresses and the project quickly took shape. A talented sensuous Flamenco dancer from Barcelona and a gifted Kiwi improviser; irresistible.

Jonathan Crayford has long been one of my favourite musicians and any project of his I will follow with enthusiasm. The thought of him doing a Jazz/Flamenco project filled me with joy. It takes a particular type of musician to reach across genres, and to do so with authenticity is a challenge. If anyone could pull this together at short notice it was Crayford; with his open ears and extraordinary musicality, he ticked all of the boxes. In recent years, he has performed in Spain, but only on Jazz projects. When I spoke to him two weeks before the gig he told me how pleased he was to work on this project, but that he knew little of Spanish music; I had no doubts that he would locate a pure essence and work with it and Isabel Cuenca was the perfect foil. As soon as they appeared on the bandstand the chemistry was obvious.

There is a real synergy between Jazz and Flamenco; they are musical cousins. Both musical forms fuse North African Rhythms with unique harmonic approaches, both created out of harsh repression. Underlining the driving rhythms of Flamenco is pure passion, contrasting a sad but beautiful dissonance. The musicians and dancers frequently call to each other in encouragement and this is not so different from the call and response in jazz. That they are similar in essence is hardly surprising – when the chants, dance and polyrhythms of Congo Square met with Creole melody, fed by a multitude of European influences (including Spanish music), Jazz was born. 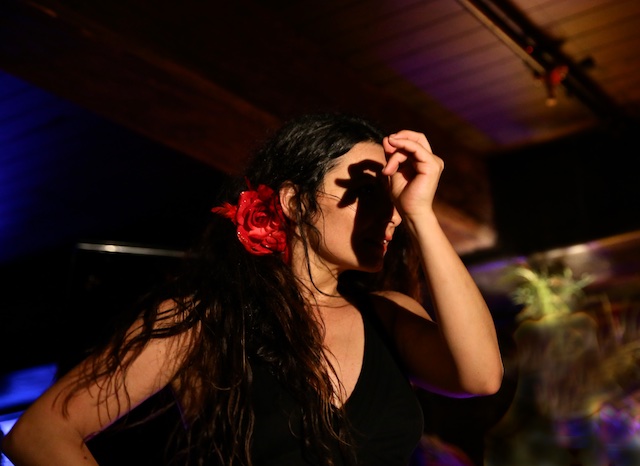 Early in the first set, Crayford played a variant of his composition ‘Galois Candle’. This appears on his ‘Dark Light’ album nominated for a Jazz Tui award last year. This memorable tune although rhythmic is not the first thing that comes to mind when you think of danceability. The synergy between dancer and pianist soon located a sweet-spot in the heart of the tune. I recall Cuenca telling me that everything else in Flamenco was subordinate to honest deeply felt emotion. That is where the Duende resides. A little later we heard an innovative and compelling version of ‘Will o’ the Wisp’ (from El Amor Brujo) by Manuel De Falla. Not the brooding version that Gil Evans used on Sketches in Spain but a paired down version. Stripped to the barest essentials of melody and rhythm. Crayford dampened the strings with one hand and created a simple clipped strumming effect, while Cuenca sang gently over this, softly clapping all the while. It could not have been more effective. After that came a tune by Fredrica Garcia Lorca, the poet who died at the hands of Franco’s Nationalists. This tune ‘Los Cuatro Muleres’ sounds pretty, even jaunty, but it hides a deep sadness as with all Lorca poems and tunes. Again done movingly, and both Crayford and Cuenca sang verses.

During the second set we heard tunes which moved closer to the Flamenco idiom. In these free-ranging highly improvised tunes Crayford has few peers. Towards the end of the evening, the two were in absolute lock-step; Cuenca reacting to every nuance of the music and bringing her fluid kinetic brilliance to bear, dancing her way into the hearts of everyone there. The communication was simply electric.

I have posted a video clip from the first set (Galois Candle [Crayford]) and an audio clip from near the end of the second set. I hope that Crayford records some of these tunes as they were magical. Cuenca has many fans in new Zealand and she says that she will return here soon. I hope so because more of this project would please us.