While not located on the Jazz touring circuit in the way Europe is, New Zealand gets some surprising and unexpected treats throughout the year. This was certainly one of them. Because I’ve been travelling recently, I had not noticed this gig coming up and it caught me quite off guard. From time to time I’ve heard mention of the New Zealand born composer and saxophonist Hayden Chisholm, but I had never heard him play. The little that I did know, was that he’d lived in Europe for many years and that he’d been a microtonal innovator. His CV reveals an amazing diversity of achievements and among them; teaching, composing for large ensembles, recording around the world, film soundtrack scoring, festival directing, touring extensively and collaborating with installation artists. He is obviously not a musician to be pigeonholed easily and my expectations inclined me toward multi-phonic explorations or something akin to the wonderful Bley /Giuffre/Swallow ’61 trio’. What I heard was closer to the equally wonderful Bley (Karla)/Swallow/Shepherd trio.

The gig subsumed us in pure unalloyed ballad beauty – beauty of a kind that is exceedingly rare. The programme (with one exception) was of original ballads; pieces composed by either Chisholm or Norman Meehan.  Meehan was exactly the right pianist for this gig – a tasteful musician who knows when to lay out, and who never over-ornaments. His sensitivity and minimalist approach creating a bigger implied sound; each note or voicing inviting the audience deeper into an unfolding story. Later when I commented on this he repeated Paul Bley’s advice, “If somebody else sounds good, you’re not needed. So you are like a doctor with a little black bag coming to a record date” (from ‘Time will Tell’ Meehan). Paul Dyne on bass was the ideal foil for Chisholm and Meehan. Again he made each note count without busyness. Because this was an acoustic trio with the piano and saxophone unmiked, the resonance of the bass carried more weight, every harmonic adding a subtle layer. With Meehan playing so sparsely and Chisholm sailing in the clean air above, the subtlties of the soundscape were liberated until the room sang.

The compositions were varied but all were marvellous. Some so gorgeous as to take the breath away – others possessing edge – all beautifully constructed. The trio worked as an effective unit, but the Chisholm effect was inescapable. The man is simply exceptional, his lines, phrasing and tone jaw dropping. I have no doubt that his technical skills are second to none, but listening to him you never give that a thought. Every musical utterance plunged deep into your soul in the way a Konitz line does. Chisholm is quite original and modern but I fancied that I heard some faint echoes of the great altoists on Wednesday night. Perhaps that was just my imagination, but Lee Konitz (and surprisingly to me), even Art Pepper came mind; especially during Meehan’s wonderfully soulful tune ‘Nick Van Diyk’.  I have posted that clip (which is bookended with a lovely Chisholm tune ‘In Day Light Mourning’, where he plays a lament against a drone). The lament references the music of India and Japan, utilising extended technique (Chisholm has studied in both countries). 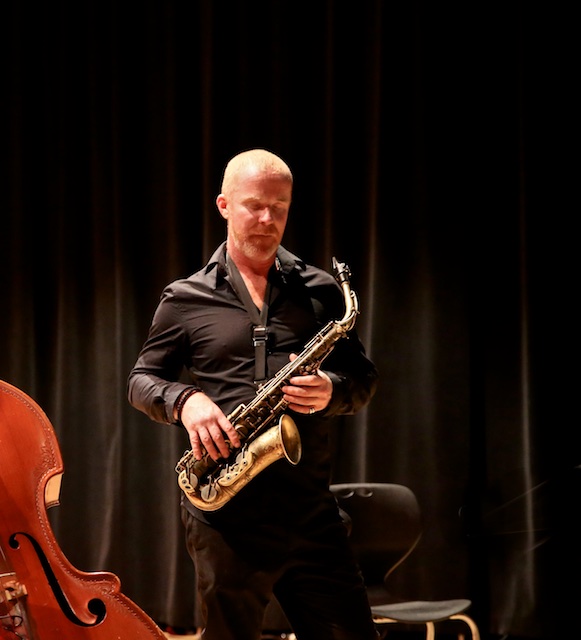 It was one of those concerts that made you feel lucky. The sort of concert that you will recall in later years and regale those who missed it with vivid descriptions – enough to make them green with envy. For those who missed the gig or for those who want to relive it, the trio are recording this week. I will keep you posted on that and on where to obtain the album. In addition Norman Meehan has a new book out – a history of New Zealand Jazz. That can be ordered through any main street book outlet (my order is in).