Against a background of complacency in regard to the ever declining biodiversity on the planet, one band is determined to raise our awareness. Those who have encountered the quartet on prior occasions will know the back story, connect the dots. GRG67 arose out of an impulse of crustacean empathy, an emotion usually confined to marine biologists and not Jazz musicians. However, once you grasp the fact that the band’s founder is Roger Manins, the rest falls into place. A sustainable fisher and co-manager of a small menagerie, Manins could best be described as the David Attenborough of the tenor saxophone. His world is strewn with animals and that’s the way he prefers it.

GRG67 the band, was inspired by a sea crab named Greg (as there are evidently  no vowels in the crab language, the name was rendered as GRG – but still pronounced Greg by etymological purists). At the bands inception the improvisational possibilities of the crustacean kingdom were examined, then the net was widened. Wednesday nights gig set sail for chook territory, relentlessly braving the ‘fowl’ winds of the wild west coast. With one or two exceptions, chooks (Gallus gallus domesticus) were eulogised in composition. They were plucked at by Michael Howell and Mostyn Cole, given a thunderous improvisational makeover by Tristan Deck and vocalised in all their glory by Manins.

Each tune title was accompanied by a personal story or zoological insight; each bird was treated with deep respect. With titles like ‘chook empathy’, ‘chook 40’, ‘ginger chook’, ‘dark chook sin’ we were afforded some rare insights into the avian world. ‘Chook 40’ was not about the 40th chook as you might suppose. It opened our eyes to the fact that chooks have one more chromosome than humans. During that particular tune you could really sense that extra chromosome. ‘Dark chook sin’ was an invitation to anthropomorphism. What would a chook sin look like? Manins felt that Mallard ducks were more likely to sin than a chook (anyone living near ducks who has a deck will have a view on this). 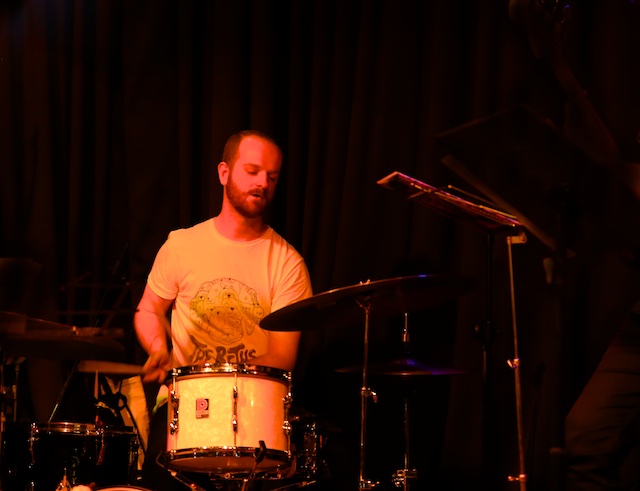 The quartet played with wild enthusiasm in both sets and the good humour of the evening was infectious. Given the subject matter it was only fitting that the gig took place at the Thirsty Dog (dogs are also a recurring theme with Manins). The venue was congenial and the acoustics good. What more could you want on the last night of Spring. This band is a rallying cry, reminding us that in this troubled world we shouldn’t take the good things for granted. At a time when we are buffeted by the ill winds of international politics, the arts matter more than ever. New Zealand Jazz rewards us in so many ways and the diversity of improvised music in our city is a treasure. You get good musicianship and fun combined – and if you’re lucky a musical insight into the natural world around us.

I have posted the bands signature tune GRG67 as it simply crackled (cackled) with life (and it broke a previous speed record). These guys are fine musicians and GRG67 was never better than on this night. These guys sizzle.