As another DOG night approached I could feel the excitement in my bones. I had followed their tracks from the groups inception, enjoying every moment along the trail. I was at their first gig in February 2013 and it amazed me then just how rounded and complete they were. If you search for the ‘(Dr) Dog’ post in this blog site you will find a video from that gig. Man that blew me away. I just couldn’t get the tunes and the excitement of that night out of my head. Later I used a cut ‘Dideldideldei’ (Holland) as the signature for my YouTube site. I also sent the cut to a Jazz DJ friend Eddie B in LA and he played it on his show. Unsurprisingly people phoned in immediately wanting to know, “who were those amazing cats”?  Before long the group decided to record – everyone who heard them wanted more. DOG seemed to encapsulate everything that was good and exciting about the local scene – DOG was, and still is, something special.

There are so many aspects to this group that it is hard enumerate them all; of course there are the outrageous dog jokes, the brilliant compositions from each band member, the powerful stage presence, but it is something else that excites me the most. This is a band that could gig anywhere in the world and we could hold our heads up, knowing that they would do us proud, tell our story. I felt excited when they were nominated for ‘album of the year’ and as pleased as a dog with two tails when they won the ‘Jazz Tui’. Now it is rumoured that a new DOG album is on the way. I can’t wait.

Most bands take a number or two to warm up, but not this one. At the Thirsty Dog the band leapt out of the starting gate like fixated greyhounds after a lure. The first number of the first set was a new composition by bass player Oli Holland (‘Scheibenwischer’ – this translates as windscreen-wiper) and it sounded great, setting the tone for the evening. Next was Ron Samsom’s tune ‘Push Biker’ (the first track on the DOG album). The intro begins with a long morse like pulse, everyone joining in but from a different perspective, then a melodic head – coming right at you like a freight train. A great vehicle for Roger Manins to use as a launch pad as he jets into orbit on his solo.

Throughout the sets were a scattering of familiar DOG compositions – plus a few new ones (like ‘Merde’ by Samsom and Hollands ‘Shceibenwischer’). All of the tunes sounded fresh and somehow different, perhaps because Kevin Field was playing a Rhodes and not a piano. I love the Rhodes in all its antique glory and in Field’s hands it is especially wonderful. It cut through the room like crystal. Hearing the familiar tunes like ‘Peter the Magnificent’ (Manins), ‘Icebreaker’ (Field) and ‘Sounds like Orange’ was like meeting old friends. The last track of the evening was the familiar ‘Dideldideldei'(Holland). DOG ripped into it with the usual abandon, leaving us shaking our heads in disbelief and grinning like Cheshire cats. 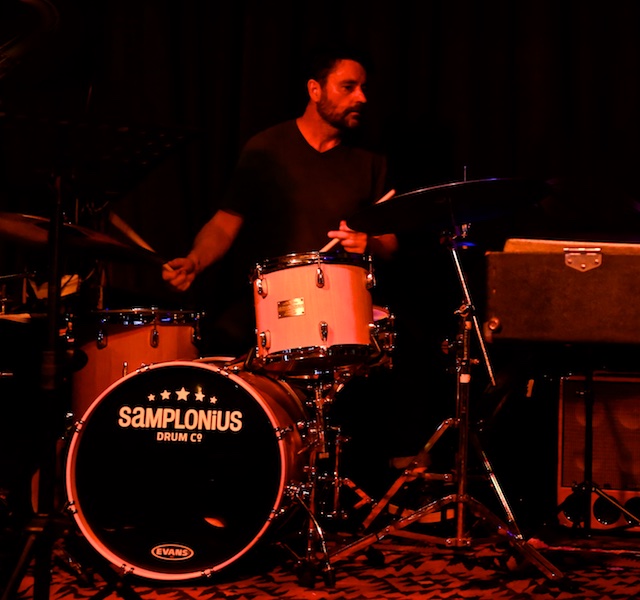 The Thirsty Dog works well as a venue, having good acoustics, good sight-lines and a sizeable bandstand.  They also serve snack food and they are most welcoming. The first DOG album is available at Rattle Records and if you don’t own a copy don’t delay. Everyone wants a DOG for Christmas.

FYI: YouTube refuses to upload video, even though I have some great cuts from this gig – will post if I ever get it sorted.