I have listened to John Bell over a number of years and I have always marvelled at his inventiveness. Bell (along with Jeff Henderson), is widely acknowledged as the experimental music guy, the free improvisation guy. He is a musician who takes risks as he aims for clear skies; a musician who involves himself in interesting cross-cultural collaborations, a vibraharp player who doubles on brass instruments. He is an artist who you always associate with innovation – consequently, other musicians look up to him. 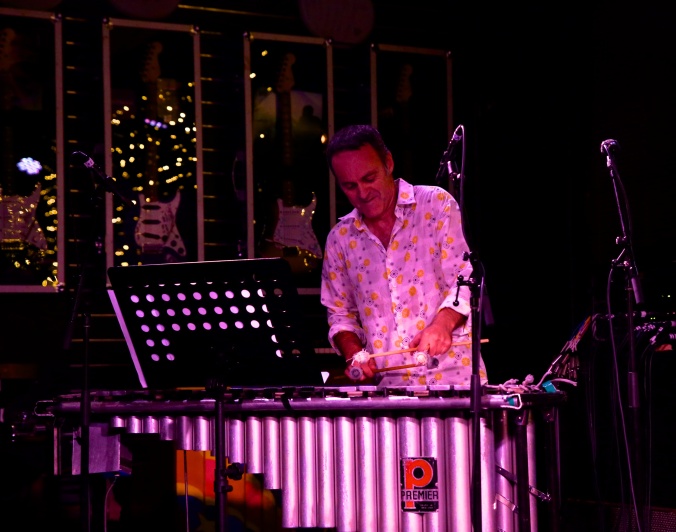 In spite of his wide-ranging credentials, I had never seen him perform this type of material and I anticipated it keenly. His latest project, the Aldebaran Quartet, dove into the explorations of a specific era. The warm modal music of the late sixties and seventies. A time in Jazz when the behemoth of Rock dominated the airwaves and filled record shelves – eclipsing everything else in view. It is unfortunate that audiences looked away just then because out of that era came a heady brew of fresh ideas. Hidden in plain sight were improvising trailblazers; laying down wonderful music, incorporating new freedoms, and embracing a quasi-secular space age spirituality. This was the era when Bobby Hutcherson and Herbie Hancock took a new direction with ‘Oblique’ – when Chick Corea cut ‘Tones for Jones Bones’; both albums featuring the scandalously underrated drummer (and vibes player) Joe Chambers: an era when Eddie Henderson released ‘Sunburst’, Bernie Maupin ‘The Jewel in the Lotus’, and when Alice Coltrane and Don Pullen broke new ground. And all the while looking toward some distant star system or an inner world; all bringing a new flavour to the improvised music scene.

This was a gig filled with mesmerizing soulfulness, but underneath the shimmering sound lay some very clever compositions and great musicianship; referencing a time when modal music stepped free from the formulaic. An era ripe for further exploration. This was complex music made to sound simple; a visceral music that took you to its heart without the need for pointy-headed insider knowledge.  The track I have posted is a good example, the lessons of eastern and western music, absorbed, expanded and all without a hint of contrivance. Melodic patterns over a crisp undulating drum pulse, piano and bass picking up the pattern, in unison or in response, freeing the vibraharp to explore the possibilities as they opened up space.  The tune in question ‘Atagato’ (Bell) is a wonderful composition. It resonates deeply, the complexity artfully hidden behind simple themes, throwing up a melody line that is merely implied.  The clever musical devices employed were endless but for the listeners, that was not important – it was the immediacy, the resonance which touched us. Bell is a true tintinnabulist and we are lucky to have him home.

When Vibes and piano play together they often take a different tack from that of guitar and piano. Occupying the same tonal range is avoided in the latter case but with piano and vibes, a unison approach is frequently employed. When either piano or vibes are comping the chords can become mirrors – reflecting each other but varying fractionally to add texture; completing each other through the harmonics arising from their different timbres. In this respect and others, the pianist Phil Broadhurst was superb. Again, I am very familiar with his output, but I had never heard him in this context. His solos were in the pocket and his sensitive comping concise, supportive.

Bass player Eamon Edmundson-Wells was just right for this gig.  Like Bell, Edmundson-Wells has a firm foothold in the avant-garde scene. The more I hear him the higher my regard for his musicality. He is an extraordinary young bass player and capable in any given situation. The remaining quartet member was drummer Steve Cournane. From the first few beats, he stamped his authority. His rhythmic feel interesting and a little different from other drummers about town. He lived in South America for some time and it’s really good to see him back on the scene. There is something of the classic Jazz fusion drummer about him but more besides (he sometimes reminds me of Peter Erskine or perhaps Lenny White). Together they form a great unit. I hope that they record this material and perhaps exchange the keyboards for an acoustic piano when they do. These compositions and this unit are far too enjoyable to disappear from earshot.