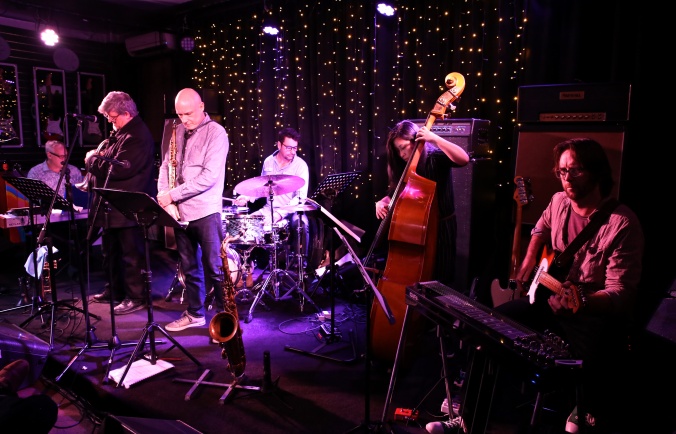 This project was bound to happen sometime and it was long overdue. On the night of the bands first gig, the pent-up energy that had long been building found a voice. As they kicked off, the room filled with potent energy and the enthusiasm of the band was met in equal parts by the capacity audience. Steve Sherriff is fondly remembered from Alan Browns Blue Train days and he brought with him an interesting group of musicians. Most of them were compatriates from earlier bands and their familiarity with each other musically paid dividends.

On keyboards, was Alan Brown and this was an obvious and very good choice. Brown has a long history with Sherriff and this was evident as they interacted. On trumpet was the veteran Mike Booth; a musician more than capable of navigating complex ensemble situations and delivering strong solos. Ron Samsom was on drums, another well-matched band member, ever urging the band to ever greater heights as he mixed organic grooves with a hard swing feel. Then there was Neil Watson on pedal steel and fender guitars and Jo Shum on electric and acoustic bass. When you put a group of strong soloists and leaders together there is a degree risk, but these musicians worked in perfect lock-step. As in sync as they were, Sherriff was the dominant presence on stage and no one doubted who the leader was. 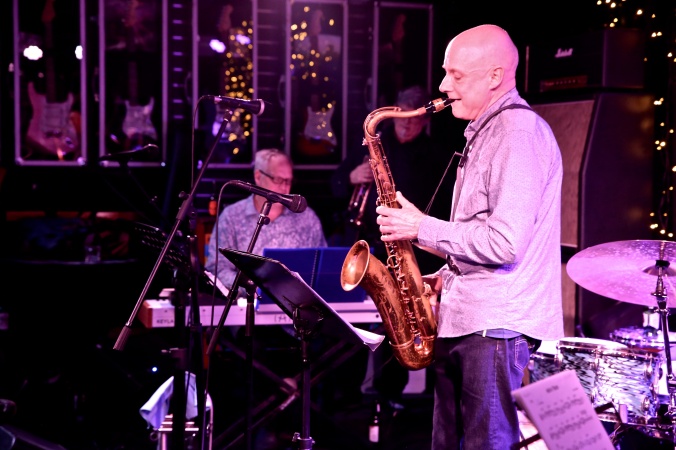 Sherriff is a fine saxophonist with a compelling tone on each of his horns. On this gig, he alternated between tenor and soprano (though he sometimes plays alto in orchestral lineups). He has an individual sound and it is especially noticeable on tenor ballads and on tunes where he plays soprano. His other strength lies in his compositions. He and Brown contributed all of the numbers for this gig, but in future, other band members will be contributing also.  This was small-ensemble writing of the highest order – tightly focused – melodically and harmonically pleasing. The faster-paced numbers were reminiscent of hard bop – the ballads memorably beautiful. Brown and Sherriff set a high compositional bar.

It was Watson though, who took the most risks and the audience just loved it. At times he appeared to be stress testing his Fender as he bent strings and made the guitar wail. At other times he was the straight-ahead guitarist in Kenny Burrell mode – then on a ballad number, he would gently coax his pedal steel guitar and play with such warmth and subtlety that you sighed with pleasure. It had been a while since I’d seen Jo Shum perform and this was a setting where she shone.

Although the band was only formed recently, they will be ready to record sometime in the near future.  The material and the synergy of the band is just too good to squander.