March fifteenth began as good days should, with sunshine, a cool breeze off the ocean, and a message from a Jazz Journalist colleague in Australia. ‘Would I like to meet some award-winning Greek Jazz musicians’? I had stuff planned, but the plans were easily shelved and I drove from my leafy hilltop retreat into the city. The musicians had flown into Auckland to join a passing cruise ship and were only in town for eight hours. Ahead of them lay four months of playing standards, original material (if lucky), and the inevitable but often regrettable requests. We met up in a central city cafe. ‘John’, they yelled as I walked around the corner. For the briefest second, I wondered how they had recognised me, ascribing it to a Jazz sixth sense, then remembering my tee shirt was emblazoned with the words Prahu Jazz. We introduced ourselves, and headed for the waterfront at my suggestion, chatting as if we’d known each other for years. That’s the way in the Jazz community. You travel to a place you’ve never been before and someone will message you with the contact details of ‘cats’ to hang with. Such hangs generally follow a well-trodden path. ‘Do you know this or that cat – killing?’ Always followed by outrageous road stories and laughter.

Evgenia Karlafti is a B3 organist, pianist, and vocalist. Her husband Nester Dimopoulos is a guitarist. They were joined on the cruise by Argentinean bass player Julia Subatin and Mexican drummer Gerardo Lopez. Everyone spoke English which is lucky because I have no Greek or Spanish. After hours of discussing music, the topic took a political turn. Earlier the musicians had made a point of referencing the peaceful laid back Auckland vibe. I recall boasting that our geographical isolation, independent foreign policy, and nuclear-free legislation protected our Island from many of the problems besetting other parts of the world. “We are an independent social democracy very like Norway,” I said, little realising how strong the synergies were. I pointed towards the Pacific ocean at our doorstep, adding, “trouble is inclined to lose its way long before it reaches our shores”. We discussed the Greek political situation and I asked how the Syrian refugee situation had impacted on everyday life. We discussed compassion and the problem of compassion fatigue. We discussed Turkey and the unhelpful belligerence of President Recep Erdogan. 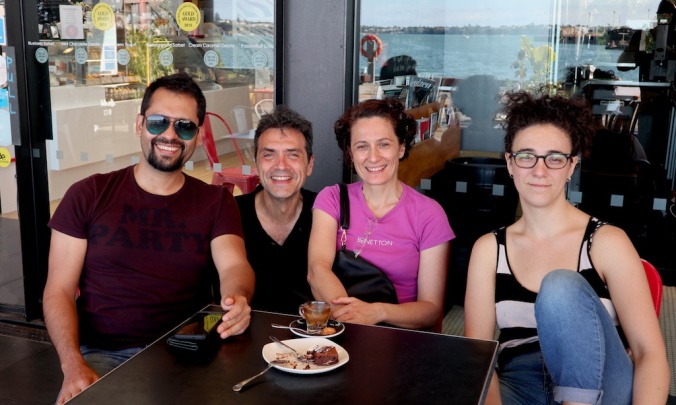 Evgenia and Nestor promised me a physical copy of their latest album titled ‘Cut to the chase’, messaged me a link and we agreed to meet up again when the ship was in port next. After we had parted I grabbed my phone and listened to a track from their album titled ‘Senior Citizen’. Perfect. As I drove home I recall thinking that this was a day among days and then I turned on the car radio. The news spoke of an attack on a Muslim community. I am used to hearing such reports. Tragedies which occur elsewhere – reported on by Christiane Amanpour or Lyse Doucet. In this case, I heard a tearful Kiwi voice. Had one of our foreign correspondents been caught up in a terror attack in London or Paris? The word Christchurch soon dispelled that notion and numbness set in as more facts emerged. A massacre of fifty innocents was happening on our soil and perpetrated by an Australian Neo-Nazi white supremacist. The carnage had started at around the exact time I was boasting about our immunity from such horrors. I don’t remember driving the rest of the way home.

Our amazing Prime Minister set the tone for what followed while we glued ourselves to the TV sets silently grieving. Why here we all asked and the Prime Minister gave us the answer we needed.  “For those of you who are watching at home tonight, and questioning how this could have happened here, we, New Zealand, we were not a target because we are a safe harbour for those who hate. We were not chosen for this act of violence because we condone racism, or because we are an enclave for extremism. We were chosen for the very fact that we are none of those things. Because we represent diversity, kindness, compassion. A home for those who share our values. Refuge for those who need it. And those values will not and cannot be shaken by this attack”. Norway and New Zealand were now linked in more ways than I had ever imagined.

The next day New Zealand fell silently numb as people watched TV or visited the local mosque with flowers and cards. The Prime Minister’s words “They are us” rang out as we donated millions of dollars to the survivors and their families. Biker gangs offered themselves as bodyguards and our sadness grew as we contemplated the fifty innocents slain in our midst. Powerful images flashed across our screens. Jewish Rabbis, Imams, Anglicans, Catholics, Buddhists, Hindus and Coptic Christians arm in arm outside the Mosques. For the first time, our police carried weapons in public as our terror alert went from low to high. It had never been anything else but low. The unusual spectre of armed police, softened by the policewomen wearing headscarfs and clutching roses to their weapons. An entire nation heard the muezzin call the Adhan when the Islamic prayer rang from our Parliament the next day and from our public broadcast outlets. Surely, one of the most beautiful and evocative pieces of music ever conceived. For a day, following the lead of the Prime Minister, secular and Christian woman donned the hijab out of respect.   

This was an outrage hard to talk about; it was so new to us and so raw. We let the images guide us through our grief and as if urged by an unspoken force, started to debate our colonist past. The evils of racism and wrongs yet to be righted. Some days later I was back in our local Jazz club and the place was packed. There was no mention of the horror but it hung in the air. We had come there to be transported and to heal. Albert Ayler put it well when he said, ‘Music is the healing force of the universe’. On offer was Ron Samsom’s much-loved band ‘The Neutrino Funk Experience’. The band, understanding the vibe went absolutely wild as they sent their crazy danceable tunes heavenward. They turned happy into crazy happy and the barman, moved by it all, turned on the rock-effect strobe lighting. Each funk ridden note healed our bruised souls. We didn’t need overly complex or sad tunes; we just needed this.

Ted Gioia recently tweeted a finding by scientists, indicating that music may possess mass. A day later I read a piece by a prominent scientist reminding us of the absolute interconnectedness of life forms. It is likely then, that music is the glue; music that most ancient of languages. In my world, improvised music is super glue and the balm for all life’s ills.  I have played both the Neutrino Funk Experience album and the Music Soup album endlessly during the last few weeks and with each hearing, my belief in humankind restores.

Dedicated to the victims of the Christchurch Massacre and to the musicians who heal us.

With thanks to Rom Samsom, Roger Manins, Grant Winterburn and Cam McArthur of The Neutrino Funk Experience & to Evgenia Karlafti and Nestor Dimopoulos of Music Soup.