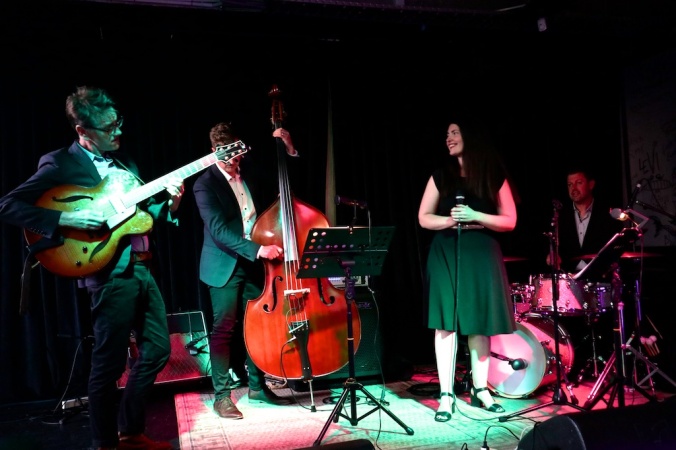 I was barely off the plane and my brain was full of dense fog, no doubt a legacy of San Francisco Karl who had been circling me like a spectre for a good month. I gamely fought the malaise off and because I am a creature of habit, dutifully made my way down to Auckland’s CJC Creative Jazz Club. In my experience, it pays never to miss a live improvised music gig, because if you do, you risk bitter regret. Believe me, I often lie awake lamenting a missed chance to see John McLaughlin.

Last week the Australian Duo, Emma Gilmartin and James Sherlock were on the bill accompanied by Christchurch Bass player Michael Story and Wellington drummer Mark Lockett. Lockett, who helped organise the tour, is a mainstay of the Wellington Jazz scene and offshore musicians like this arrive due to the skilful tour-on-a-shoestring wrangling of his ilk. We get to hear these Aussie, European and American bands in our New Zealand Jazz clubs, largely because of the work put in by a handful of dedicated musicians like Roger and Caro Manins (and Lockett). These organisers pitch in uncomplainingly as they lock down the events and we benefit as a result. Consequently, New Zealand has developed a rich improvised music circuit and a debt of gratitude is owed to the organisers (and to the volunteers who quietly assist).

Emma Gilmartin is a Melbourne based vocalist, composer and teacher and it was her first time performing in Auckland. She has received praise from the Australian music press and is one of an increasing number of gifted vocalists emerging out of the Australian Jazz scene. She is pitch-perfect and her appealing voice finds the corners of a room with ease. Like all good Jazz vocalists, she imparts a mood of engaging intimacy. Her co-leader on this tour, was guitarist James Sherlock, a notable musician and the perfect foil for a vocalist. An accompanist who understands how to enhance vocal performance by offering challenges and he knows how to comp without getting in the way. He is a gift to any vocalist.  On solos, he also excels, at times bringing to mind earlier greats like an Oscar More (behind Nat Cole). Christchurch Bass player Michael Story rounded off the quartet nicely and it was obvious that he was enjoying himself. Again, he was the right person for the ensemble.

The program was a mix of tasteful standards and interesting originals. I have put up a clip which demonstrates the strengths of the quartet – witness the tasteful musicality of Lockett’s drum solo as the band digs into a swinging version of ‘Nica’s Dream’ by Horace Silver.  Gilmartin appeared to be relishing her time in New Zealand and she announced that she would try and return next year. We hope so.