The Mark Donlon trio gig gave us two leaders for the price of one. Accompanying Donlon was the highly rated LA bass player Tom Warrington. Jazz audiences in New Zealand are very familiar with Warrington as he toured here on many occasions. Donlon, originally from the UK is now living in Wellington and working as the Jazz Studies program leader at the New Zealand School of Music.

Donlon is a Post-bop pianist with a grab-bag of familiar standards and a number of original compositions at his fingertips. He is also adept at writing ‘contrafacts’; new tunes written over the changes of existing standards. While such practices are strongly associated with Parker or with innovative Post-bop improvisers, the practice actually dates from to 16th century. Some of the standards were reharmonised while he played others in familiar ways. It was a nice selection; including the song book standards ‘If I were a bell’ (Frank Loesser), ‘Darn that dream’ (Jimmy Van Heusen), ‘How deep is the ocean’ (Irving Berlin), ‘Quiet nights & quiet stars’ ( Tom Jobim) and Jazz standards like ‘Stolen Moments’ (Oliver Nelson) and ‘Nutty’ (Thelonious Monk). When I hear songbook standards by Berlin like’ How deep is the ocean’ or the equally engaging ‘Lets face the music and dance’ I am awe-struck. They are perennial in the fullest sense of the word and I hope that their star never wanes.

I have been a Tom Warrington fan for many years and I have most of the Jazz Compass albums where he features to such great effect. He is a bass player who speaks with incredible forthrightness, but never undermining the others on the date. On ‘Corduroy Road’, a fabulous album that I play often, the ‘others’ I refer to are Larry Koonse and Joe Labarbera. These guys can do no wrong; their version of ‘You Must believe in Spring’ (Bergman/Bergman/Legrand) is a small masterpiece.  We are lucky to have such a strong association with Warrington and Rodger Fox is the one to thank for that. I last saw him during the ‘Cow Bop’ tour, where his band shared the stage with guitarist Bruce Forman (and the Cow boppers). A friendly modest man of enormous talents and good company. When I spoke to him last Wednesday I learned that Larry Koonse (and perhaps Joe Lababera) will be touring New Zealand soon. Koonse has suffered health problems of late but he is evidently recovering well. Warrington’s recording credits are too numerous to mention. Tom is now domiciled in this country which is very good news. 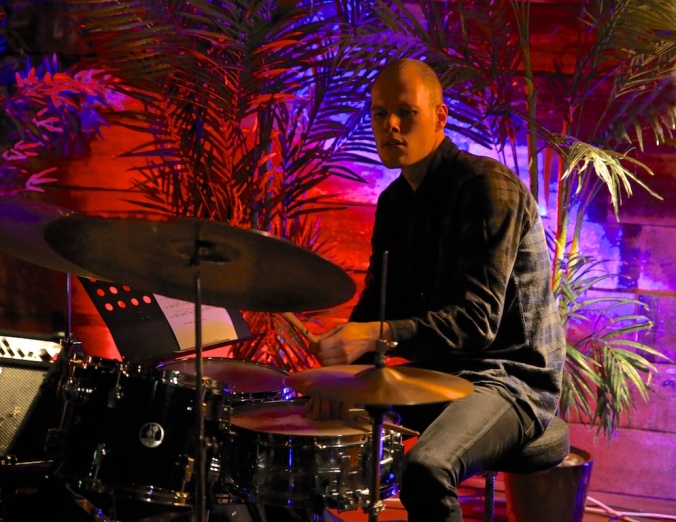 Cory Champion although Wellington based is no stranger to the CJC. He was there earlier in the year with Matt Steele’s ‘Master Brewers’. He writes and plays well and it is likely that we will see him in the drum chair often.